Book Review for: Life After Life by Kate Atkinson #bookreview 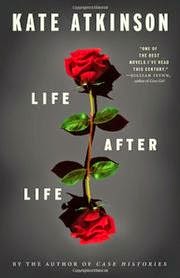 Atkinson pens a gripping novel with "Life After Life." What if you could do it over and over again until you got it right? And then do it again? Atkinson explores that "what if" not only historically, but emotionally when her main character, Ursula Todd, dies, only to come back again, life after life.

The novel starts with Ursula bravely walking into a German café in 1930 and shooting Hitler. Then it depicts Ursula's birth and death again, strangled by her umbilical cord. Ursula continues the pattern, gaining a sense of understanding of the phenomenon through déjà vu. Can Ursula send history down another path? Will this eternal loop build Ursula's character and fortify her inner courage or turn her into a raving lunatic?

Atkinson explores the early 20th century, depicting family struggles through World War I, culminating in several powerful and poignant scenes regarding the London blitz. She also examines a wide range of emotions through her characters. Ursula's family members, Hugh, Sylvie, Izzy, Pam, and Teddy each possess certain character traits and values that remain constant on her journey, which help to steady and ground her while she experiences changing life scenarios. Ultimately, it's her brother, Teddy, that inspires Ursula to set herself on a course that will define her character.

Atkinson's writing style requires the reader to slow down and savor the written word. That said, the book is hard to put down, leaving you wondering how Ursula will face the next daunting life challenge. The end was a bit disappointing especially after exploring the best and worse of what humanity brings out in the characters.  What will Ursula face next? Is there no reward for her?

Life After Life is a novel where the characters and their choices will resonate with you long after you've finished reading.

Question: Have you read Life After Life or any of Atkinson's work?  I'd love to hear your thoughts and impressions.
Posted by Stephanie Burkhart at 1:30 AM