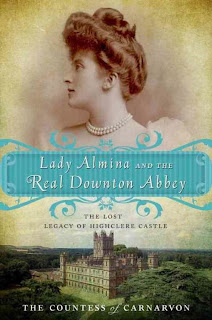 Book Review for: Lady Almina and the real Downton Abbey
Written by: The Countess of Carnarvon
Broadway Paperbacks
ISBN: 978-0-7704-3562-2
3.5 Stars

Almina married the 5th Earl of Carnarvon in 1895, a young 19-year-old. She was the daughter of Alfred de Rotheschild, a product of an affair. Alfred doted on his child.

Almina lived during a dynamic time when change and innovation happened rapidly. Candles were replaced with electricity. She was kind and caring, but what makes Almina such a charismatic character is her ability to change with the times. One of her greatest achievements is the establishment of hospitals and procedures of well care that enable soldiers to recover from World War I.

The cast of characters around Almina are also adaptable to chance and supportive of each other. Her husband shares the distinction of discovering King Tutankhamun's tomb with Howard Carter.

The author's writing style piques the reader's interest by telling personal stories of those involved in Highclere Castle. The Castle also doubles as the Castle seen in Downton Abbey. The current Countess of Carnarvon brings history alive with her tales of Almina, the 5th Earl, their children, the Earl's brother, Aubrey, and their servants.

If Downtown Abbey has drawn your interest, then the story of Lady Almina proves a nice, historical compliment to the series. "Lady Almina and the real Downton Abbey," is a heartwarming read, as vivid as Downton Abbey, the series inspired by Highclere.
Posted by Stephanie Burkhart at 4:30 AM