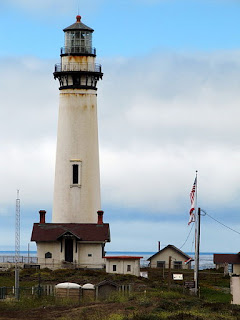 A couple of weeks ago I shared with you one of the ugliest lighthouses in California at Long Beach. Today, I make up for it by sharing one of the most picturesque lighthouses – Pigeon Point.

Pigeon Point is located south of San Francisco on a rocky promontory. (mass of rocks) Its 115 feet tower makes it one of the tallest lighthouses on California's coast.

Pigeon Point opened in SEP 1871 with a steam whistle (fog signal). Unfortunately, bad weather and heavy rain caused a 14 month delay with installing the light. On 15 NOV 1872, the 1st order Frensel lens went into use. A frensel lens was developed by French physicist Augustin-Jean Fresnel for lighthouses. The design allows the construction of lenses of large aperture and short focal length without the mass and volume of material that would be required by a lens of conventional design. Compared to conventional bulky lenses, the Fresnel lens is much thinner, larger, and flatter, and captures more oblique light from a light source, thus allowing lighthouses to be visible over much greater distances. (Definition taken from Wikipedia: http://en.wikipedia.org/wiki/Fresnel_lens)

Pigeon Point's Frensel lens weighed 4 tons and rotated every 4 seconds. Originally powered by a clockworks and weight, electricity replaced that in 1926. 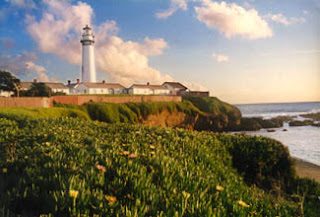 A lighthouse is only as interesting as the people and stories behind it and Pigeon Point has some interesting stories. The one I found most interesting involved The Carrier Pigeon, a 175 ft. Clipper ship.

In the fall of 1852, a Clipper ship, The Carrier Pigeon, began its maiden voyage from Bath, Maine. After traveling around Cape Horn, it traveled up the west coast of the Americas. Not far away from San Francisco, near Santa Cruz, the fog really got thick and the boat struck rocks, sinking. The crew made it to shore, but the ship was lost. Sadly, the boat was valued at $54,000. In the 1860's, 3 more ships were lost in this area due to the heavy fog. 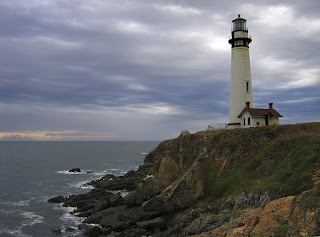 Can you imagine traveling months down the east coast of the Americas, through Cape Horn and up the west side of the America only to crash miles from your destination? Big Bummer.

Today the tours to the tower are closed due to crumbling brickwork, but every year on the 15th of NOV the Frensel lens is lit to celebrate its anniversary. The lighthouse keepers housing currently serves as a youth hostel.
Posted by Stephanie Burkhart at 6:00 AM