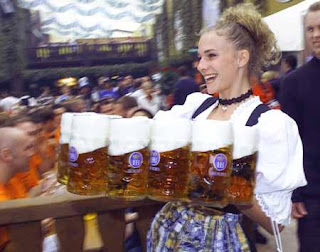 Can you believe it? Germany's world famous beer festival is 200 years old. But it wasn't always a beer festival. Trust me. *grin*

So what was the even behind Octoberfest? Simply, a wedding.

Crown Prince Ludwig (who later became King Ludwig I of Barvia) married Princess Therese of Saxony-Hildburghausen on 12 October 1810. Weddings were a big deal back then and the crown prince's? A very big deal. The citizens of Munich were invited to attend the festivities which included a horse race. The festivities lasted five days. Anniversary celebratation were held annually after that.

An agricultural show was added in the second year. Interestingly, in 1818 a carousel and two swings were added. In 1816 carnival booths popped up with prizes of silver, porcelain, and jewelry. In 1819, the founding citizes of Munich assumed responsibity for the management of Octoberfest. It was then lengthened and pushed back to the send of Septemeber since Barvia often has good weather then. October is generally the last two weeks of September and the first week of October. This year, Octoberfest is set to start on 18 SEPTEMBER.

In 1850 a parade was added to honor the marriage of Ludwig and Therese. 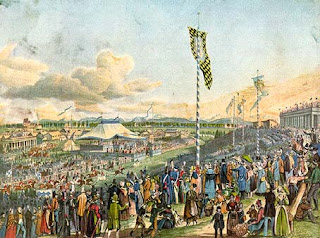 NOTE: I was very surprised to learn that no beer was served during the early years of the fest. In the 1870's mechanical rides expanded the festival. It was during this time that the city of Munich of began allowing beer on the fairgrounds and makeshift stands started to pop up. In 1892 beer was first served in glass mugs. In 1896 these stands were replaced by beer halls.

The horse race mentioned above were last held in 1960 and the agricultural show is held every 3 years.

In 1950, Octoberfest settled on a traditional style opening. A 12 gun salute is givine and mayor of Munich taps the first keg with a cry of "O'zapft is!" (It's tapped!) The mayor then gives the first beer to the minister president of Bavaria.

Nowadays there are mechanical rides and several beer tents.

Marzen is the traditional beer of Octoberfest. It is usually darker and stronger than traditional beers and lagers. It is generally brewed in March and ages through the summer so it is ready to drink in the late summer early fall. Only four ingredients are allowed in the beer: barley, hops, malt, and yeast. 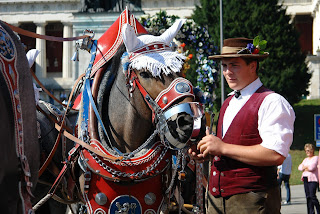 Beer is served in 1 liter mugs and usually cost 8 euros.

The Barvarian branch of the German Red Cross operates a aid facitlity for those who drink too much beer with 100 volunteer medic and doctors.

I went to Octoberfest in 1992. I had a couple of mugs at the Lowenbrau beer tent and I can honestly say the beer goes to the head the quickly. There was so much to do, though. The tents were HUGE. and the rides were abundant. I had a great time. We took the train there and back so we didn't worry driving.

Octoberfest has inspired numberous fests around the world. Anyone want to share their local fests?
*grin*
and Probst!

Steph
Posted by Stephanie Burkhart at 10:57 AM