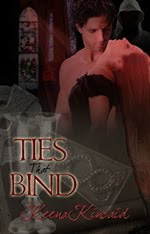 TIES THAT BIND is by author Keena Kincaid and the book is published through "The Wild Rose Press." It's also available on ebook, but I have it in print. I enjoy reading romance, which this book is, and "The Wild Rose Press" has it listed in their Faery Line since it involves "light" magic.

So why am I reading this book? Because I loved the first book, Anam Cara by Keena. In that book, Bran ap Owen came to Carlisle looking for his soulmate, Liz. He had to make things right for them so they could finally be happy. His brother, Aeden, was tied into the "making things" right aspect. In that book, Aedan, and Liza's daughter, Tess, have a "first love" love affair, but are seperated when the book ends.

Ties that Bind is the sequel and tells Aedan and Tess's story. I've been looking forward to reading this book since it came out.

What I enjoyed about Anam Cara is that it's set in an historical setting, England in the 1160s during the time of Henry II and Eleanor of Aquitane. Aeden and Bran are mistrals. There's a also a nice dose of "magic" laced into the storyline. The clan from Duncarouch (sp?) are Sidhe and have magical abilities. Both Bran and Aedan have magical ablities. Lace in a little of magic, a little history, and a compelling love story and I'm hooked.

In "Ties That Bind," Aedan is sent to Carlisle to solve a mystery and encounters Tess. The chemistry between them is undenable to everyone around them. They try to deny it themselves, but I doubt they won't get far. There's also intrigue as to who fathered "Daz," the boy that Aedan looks after.

Here's a blurb for the book:
Out of place in the Plantagenet court, minstrel AEDAN ap OWEN misuses his Sidhe gifts for the king's dark business. Sent north to investigate rumors of treason and dispatch the troublemakers, Aedan discovers someone is murdering monks and stealing saints’ relics. And all clues point to Carlisle.

TESS, LADY of BRIDSWELL, refuses to rekindle her relationship with Aedan. She knows his reputation as a secret stealer—and she has a secret that must be kept. But her resolve falters when her uncle promises her hand to a man she despises and Aedan hounds her steps.

A would-be king uses the stolen relics to amplify his power, wielding it like a weapon. Meeting the traitor's magic with magic will prevent war, but it will also destroy Aedan’s chance to show Tess he has at last mastered the temptation of the ancient wisdom. Can Aedan renounce his magic to win Tess' heart anew or will he choose magic over love?


You can find Keena on the web at: http://www.keenakincaid.com if you want to check her out.
Posted by Stephanie Burkhart at 3:12 PM