To Grandmother's House I go... 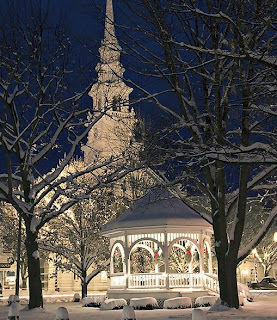 I live in California now, but when I was a little girl, I lived in New Hampshire, and some of my fondest memories is going to Grandmother's house for Christmas.

My grandmother was Ukranian, but she married a Polish guy and adapted his ways. She liked to be called Bopshie (Polish, I'm told for grandmother) but we grandkids just called her Bopie. She lived in a small rural NH town on the NH/VT/MA border called Hinsdale and the wintertime, it sure got snowy.

I lived in the big city, Manchester. The drive was a 2 hour drive through rural NH on state roads and over a hill. It really was a journey out of a postcard.

We started in Manchester and took the 101 WEST toward Bedford. Bedford was still like Manchester, haha! We went through Amherst, Milford, and Wilton. It Wilton we had to take a turn and go over a bridge. Hey, that was excitement to a little kid!

After Wilton, we went up Temple Mountain. Our ears would pop every time! I can't be sure of the elevation now because it's been over 20 years since I've taken the journey, but for ears to pop, I think it was pretty high. We traveled through Peterbourgh. We traveled through Dublin, Marbourgh, and then hit Keene. Keene was considered a city, like Manchester was, but it was considerably smaller. 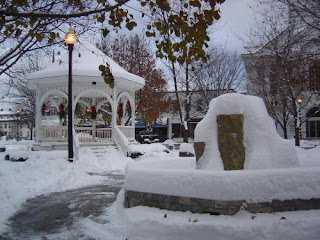 After Keene, we switched highways went through Swanzy and Winchester where we hit the 119 state highway and took that through to Hindsale. The pictures I've found where of winter scenes along the way. One is the town gazebo in Ashelot, the town before Hinsdale. In the winter time, it would be very snowy. (As I'm sure the pictures relate) Icicles would hang off the trees. It would be cold, but that cold captured a beauty that is almost impossible to put into words. On the way to Bopie's house we'd sing Christmas songs knowing our gifts were snug in the truck.

Winter in New Hampshire certainly brought out the "heartidiness" in a person. Wherever you are, treasure your winter memories.

TOMORROW: THE DESERT BREEZE SCAVENGER HUNT comes to MOLDAVIA!! Be here while I gush about my Desert Breeze release, "The Hungarian," and get the next clue for the Hunt!
Posted by Stephanie Burkhart at 1:40 PM