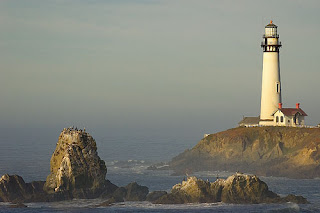 I haven’t been to any lighthouses in California, but with a huge coastline, I thought I’d go Internet exploring. Besides, I find lighthouses romantic inspiration and I’m all for learning more about California, my new home.

Pigeon Point is about 50 miles south of San Francisco. The lighthouse itself is on a cliff about 115 feet above the water. It’s one of the tallest lighthouses in America and has been working since 1872. In fact, the lighthouse will soon be celebrating a birthday. It was first lit on 15 NOV 1872 – so we’re just two days away from its birthday. The lighthouse initially had a five wick lard oil lamp and a Fresnel lens with 1,008 prisms.

In 1853, the clipper ship, Carrier Pigeon was shipwrecked on the rocks just south of Half Moon Bay and so it was renamed Pigeon Point in memory of the accident. Since 1853 to 1872, there were a total of 3 more shipwrecks. Since it proved a place hard to navigate, a lighthouse was put in 1872.

During prohibition, the point became a favorite place for bootleggers since it was so remote, yet close to San Francisco. In 1939, the Coast Guard took charge of the light. In December 2001, the lighthouse suffered some structural damage and has been closed to the public pending a retro fit.

What I liked about the lighthouse when I was cruising pictures was how it stood – tall and proud, protectively overlooking the coast. (As a side note, I have to admit, that I still get a little unnerved when I look at the California coast. It’s on the left to me, and I’m used to looking at the right and the Atlantic.) I feel this lighthouse inspiring a poem…

While there’s not much history behind the lighthouse, not like the “White Island Light,” I looked at last month, just a picture of this lighthouse inspires the imagination. Can’t wait to cook something up.
Posted by Stephanie Burkhart at 12:57 PM