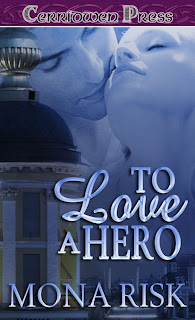 I just got done reading this international romance and I enjoyed it! Here's my review...


Risk crafts a sharp, international romance with “To Love A Hero.” Set in contemporary Belarus, Risk draws on the exotic locale to paint a modern romance between two highly driven people who crash into each other head long, sending sparks all over Minsk.

Dr. Cecile Lornier is hired to help establish a chemical lab to aid the Belarusians in cleaning up their environment. As soon as she steps off the plane in Minsk, she’s awed by the majestic setting and nearly crashes into the Major General of Belarus, Sergi Fedorin. Sergi is immediately taken with Cecile, and she with him.

As Cecile embraces the project, eager to prove her worth to the Belarusians, Sergi makes his interest known. Despite her better judgment, Cecile falls for Sergi’s charms and mixes business with pleasure. After a night of passion, the new lovers realize they’ll have to keep their affair a secret if they want the clean-up project to succeed. It’s a secret that isn’t easy to keep as Sergi’s nemesis hounds him and Cecile to the point of breaking. Pressure builds not only from outside forces, but from internal sources as Cecile believes her and Sergi’s worlds might be too far apart to make things work between them. Can Cecile and Sergi embrace the flames of love they’ve ignited, or will they be forced to put their relationship aside to keep their project from failing?

Risk writes a sharp, contemporary romance that grabs the reader as soon as Cecile sets foot off the plane. “To Love A Hero,” is an apt title; the hero, Sergi Fedorin, is admired by the people of Belarus and he desperately desires to clean up the county’s environment.

The plot is solid. The international setting is intriguing. The pacing is pitch perfect, slowing down at the right intervals so the reader can get a deep breath before accelerating again.

Risk’s love scenes are graphic and tasteful, capturing the deep feelings Cecile and Sergi have for each other. Cecile is a likable heroine and her flaw is her biggest strength – her dedication to those things she believes passionately in. Sergi is a man who captures a certain nobility even though he isn’t.

“To Love A Hero,” has a nice, original twist in that it’s set in Belarus, a country that isn’t heard of much. This romance is an exotic escape that will have the reader breathless as they turn the page.
Posted by Stephanie Burkhart at 3:50 PM