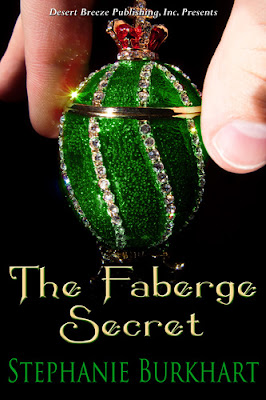 As the love story thicken, the suspense heightens and it won't let your eyes leave the page. I recommend The Faberge Secret to all of the romance readers. Even if you have never read romance, The Faberge Secret would be a great place to start.

Elise Goodwin operates a heritage museum in Brattleboro, Vermont. Needing to buy some items for her museum, she travels to Boston and acquires a delicious surprise that would excite any curator – a Faberge Egg.

Enter Russian businessman Dimitri Romanov, the true owner of the jewel. He's following a lead hoping to reacquire his stolen egg when he bumps into Elise. He can't hide his attraction to the petite brunette with doe-like eyes.

Dimitri's rival, Gustav Kelch, wants the rare Faberge jewel and will do anything to find it, including destroying Dimitri's life. Can Dimitri keep Elise and his Faberge heirloom safe or will his attraction place their lives in jeopardy?

Her friend's hands and feet were tied to a chair, and a gag was in her mouth. The room
had been trashed. Their suitcases had been turned over; their clothes and books tossed haphazardly about.
Fear knotted inside Elise. She rushed to the chair and took off Lucy's gag. Dimitri untied the knots at Lucy's feet, concern for her friend evident in his eyes. Elise was thrilled that Dimitri had helped her with no hesitation or reservations.
"What happened?" Elise asked. "Who did this?"
"They were looking for the egg," Lucy said. She glanced at Dimitri, but instead of her earlier resistance to him, gratefulness filled her gaze.
Dimitri froze and glanced up, his stare drilling into Elise. "Egg? A Faberge egg?"
Elise loosened one of the ropes around Lucy's hand and looked at Dimitri, perplexed. "What do you know about Faberge eggs?"
He muttered something in Russian, finished untying the knot around Lucy's other ankle, and stood, straightening his shoulders.
"That's what I lost. What I've been looking for -- my Faberge egg."
******REVIEWS******
4 Stars, Manic Readers
"A satisifying read."

Posted by Stephanie Burkhart at 7:01 AM