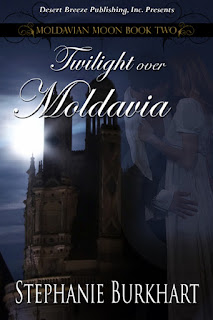 About this excerpt: Caroline has a revelation.


Caroline's gaze fell upon the young man on the horse. Their eyes locked. Her cheeks warmed, and some indefinable spark passed between them that heated her body. Oh, she had noticed several handsome guards under her father's command, but this man was different. His malachite eyes spoke of duty, the same sense of duty she harbored, yet hinted at a desire for mischief. His cheekbones were sharp, giving him an almost lupine appearance. He had an air of authority about him, a commanding presence that demanded respect.

His square jaw tensed visibly, and her gaze drifted down his leg. Her arrow had ripped his riding pants and blood trickled from a small flesh wound.

Romanian unification is on the horizon and the spirited Crown Princess of Carpathia, Caroline, would prefer to ride horses and archery to embroidery and dancing. Complicating her life is her recent discovery that she's a witch.

Prince Stefan Sigmaringen travels to Carpathia to meet Caroline. He discovers he has much in common with her. He also learns that a strange man, Timon, has an unnatural interest in him.

Upon Stefan's engagement, he overhears his mother confessing to a horrible secret – she cursed him in order to conceive him and Stefan will become a werewolf when he turns eighteen. There is a condition to overcome the curse, but it will require Stefan to draw on all his inner strength and Caroline, her courage. Can they break the foul enchantment and secure their future or will Stefan give himself over to the lupine curse that haunts his family?

4 Stars, InD'Tales Magazine JUL/AUG 2013
Burkhart does a fantastic job crafting all different kinds of loving relationships that endear the reader to her characters. - Sofia St. Angeles

The twisting story line will keep your nose in the book until you have finished. Stephanie's ability to add suspense and mystery to romances gives her stories all the more depth. If you love werewolf stories, romances, or a good book, I recommend Twilight Over Moldavia.