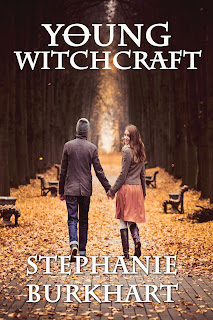 The International Digital Awards is a contest sponsored by Oklahoma Romance Writers of America and is open to all works of fiction in digital format, regardless of their romantic content.

BLURB:Rachel's secret would have Cotton Mather rolling over in his grave. She's been raised from an early age to use magic for good, despite her temptation to cast a spell against Phil the bully who can't stop teasing her.
Joe thinks Rachel is cool, especially when she weaves her healing magic spells on him, but he's got his own problems. It's not easy keeping Rachel safe from Phil's constant threats. When Phil poisons Rachel, can love and little young witchcraft bring Rachel and Joe together or have years of Phil's bullying ruined their relationship for good?

Rachel smiled her appreciation at Joe. He'd grown tall, over six feet and his green eyes sparkled like gems when the light caught them a certain way.  His blond hair had darkened a bit to sandy blond, but he kept his hair in a nice neat cut. He often had a five o'clock shadow that she found incredibly attractive on him. Joe was lean and with thin muscles, and not an ounce of fat on him. He could tear up a refrigerator. Fruit, pizza, and celery were his favorite foods. He was as picky as a black cat about what he ate since he had a peanut allergy. Joe played on the football team as a tight end or a running back. His practice must have gotten over early tonight.

***If you would like to review the book, please send me a request at botrina_buchanan@yahoo.com with Young Witchcraft Reiew in the subject line.**
Posted by Stephanie Burkhart at 1:30 AM