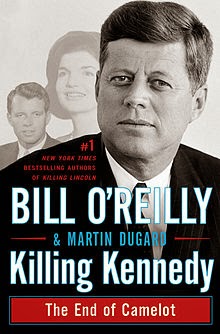 "Killing Kennedy" is a fascinating look into the life and death of President John F. Kennedy. O'Reilly and Dugard put politics aside and ramp up the suspense to tell Kennedy's compelling and inspiring story.

The novel opens with a look at Kennedy's heroics on PT-109 in World War II. At first reluctant to assume leadership, he finally does and the incident is a defining one for Kennedy, framing his leadership style for the rest of his life. There's also an examination of the eerie similarities between Lincoln and Kennedy, which prove fascinating.

As the Kennedy presidency progresses, O'Reilly and Dugard parallel Lee Harvey Oswald's life, painting a downward spiral of a strange, complicated man, detailing the happenings in his life which will lead up to him shooting the president.

O'Reilly and Dugard's writing style is crisp, clear, concise, and engaging. They paint vibrant pictures of all the men and women around Kennedy and Oswald. Taunt and suspenseful, I did not put the book down.

The book deals only with fact and makes a powerful case for Oswald as the lone assailant. I highly recommend this book.