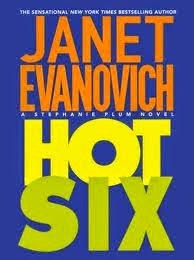 Full of action and hijinks

Stephanie Plum is back with a new crew of helpers and old favorites in "Hot Six." Fellow bounty hunter, Ranger, is accused of killing dastardly Homer Ramos, and skips bail. Steph turns down Vinnie's request to find Ranger, but that's where the trouble begins.

Everyone thinks Stephanie can find Ranger. Arturo Stolle has two men trail her. Joyce trails her. Dougie and Mooner sell goods of questionable origin and Steph's stuck with a dog named Bob. The cherry on the top? Grandma Mazur comes to live with her.

Ranger pulls Stephanie into the action when he asks her to do surveillance on Hannibal Ramos' house. Unknown to her, she witnesses several important clues that could wrap up the police case, but can she put them together before she starts getting shot at again?

The writing is crisp and clever. The pacing is spot on, giving the reader a chance to breath before picking up again.

The characters shine. Stephanie's at her best when she listens to her intuition. Lula's loyalty warms the soul. Joe does his level best to deal with his frustration. All the characters expose their faults along with their strengths and that's what ultimately makes "Hot Six" resonate with readers.

The novel is a cozy mystery with a zig here and a zag there that keeps the readers on the edge of their seat wondering what will happen next. "Hot Six" is full of excitement, action, and laughter.

Question: Who is your favorite character in the Stephanie Plum series?
Posted by Stephanie Burkhart at 1:30 AM