The Eye-Dancers
by Michael Fedison

Seventh-grader Mitchell Brant and three of his classmates inexplicably wake up at the back edge of a softball field to the sounds of a game, the cheering of the crowd. None of them remembers coming here. And as they soon learn, “here” is like no place they’ve ever seen. Cars resemble antiques from the 1950s. There are no cell phones, no PCs. Even the spelling of words is slightly off.

A compulsive liar, constantly telling fantastic stories to garner attention and approval, Mitchell can only wish this were just one more of his tall tales. But it isn’t. It’s all too real. Together, as they confront unexpected and life-threatening dangers, Mitchell and his friends must overcome their bickering and insecurities to learn what happened, where they are, and how to get back home.

The answers can be found only in the mysterious little girl with the blue, hypnotic eyes. The one they had each dreamed of three nights in a row before arriving here. She is their only hope. And, as they eventually discover, they are her only hope.

And time is running out.

Peering out his bedroom window, his eyes flattened into squinting slits, Mitchell Brant saw her.
“No,” he said.  “It can’t be her.  It can’t be.”
But it was.  She had come again.
He looked away, at the night-shadows on the floor, at the sheets jumbled and strewn on his bed.  Maybe she wasn’t really out there.  Maybe it was just an illusion, some odd distortion of the light.

He looked out the window.

She was still there.

He felt the fine hairs at the nape of his neck stand up.  Gooseflesh, cold against the stifling humidity filtering in through the open window, speckled his forearms.

The girl was standing under the streetlamp, looking straight in at him—the same way she had last night and the night before.  She was just a child, probably no more than seven years old—his sister’s age.  What was she doing out in the street, alone, well past midnight?  Was she a runaway?  And why had she come three nights in a row?

He tried to look away again, but he couldn’t.  It was as though the girl had cast a spell over him.  “What’s with you?” he said to himself.  “Just go back to sleep.”  Instead, he stood up.  She had raised her right arm above her head, waving at him frantically.

“Help me.”  The voice filtered in through the window.  “Why don’t you . . .?”  The girl’s voice.  And yet, there was something different about it, something off.  It sounded hollow, as if it had originated from a dark place, a secret place, cold like the grave.

Michael will be awarding a $25 Amazon GC to a randomly drawn commenter during the tour. Please let a comment.  Since "The Eye Dancers" is a young adult story, let us know what your favorite young adult story is.
Remember, the more you comment the better your chances of winning. The tour dates can be found here: 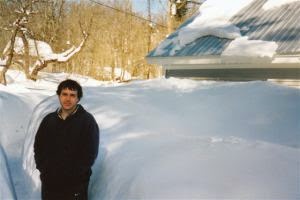 Michael S. Fedison was born in Rochester, New York, and now lives with his wife, Sarah, and regal cat, Luke, in the green hills of central Vermont. Michael has been writing creatively for as long as he can remember, and has had short fiction published in several literary magazines, including Iconoclast and The Written Word. He works as a full-time technical writer and also is a freelance proofreader and copy editor.

Michael has been a lover of imaginative stories his entire life. He enjoys any story that takes you by the hand, lifts you up, and transports you to another place, a new and creative way of looking at the world around us.