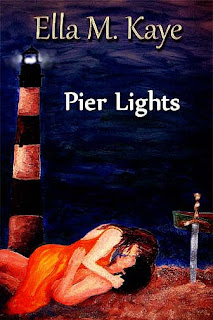 STEPH: Welcome to the blog, Ella.     I don't know much about your latest release, Pier Lights. What's it about?

Caroline was a relevé away from becoming prima ballerina when, partly due to her own actions, she was damaged enough to never be allowed en Pointe again. Returning to her hometown area, she finds a grittier dancing job and determines to land on top this time.

Dio hides away on his farm near Charleston, South Carolina, and ventures out only when he can be in disguise. He uses his swordsman skills to work out aggression and connect with others while he maintains distance. When the two collide on the beach in the glow of the lights from the pier, their personal scars push them away, and pull them in, just as the ebb and flow of the Atlantic.

ELLA: I wrote it for Nanowrimo 2012, so the first draft was done during the month of November. Of course, then there came the filling in, rewriting, and editing. Overall, about three months. It’s a short novel.

STEPH:       What was the inspiration behind the story?

ELLA: I found a photo of a gorgeous lighthouse at sunset last year and I knew it had to be a story setting. As it turns out, Folly Beach, South Carolina has been the setting for other fiction in the past and it’s a well-loved spot for both locals and tourists. Someday, I’ll get there to visit!

ELLA: I did research the area and its local businesses, as well as the unintentional landmark of the Folly Beach Boat, which is a little rowboat washed ashore during a hurricane. It’s now used for graffiti of varying kinds. The dance scenes didn’t need research since I have a dance background.

ELLA: Recovery and adaptation after personal injury. This theme will be prevalent in some form throughout the lighthouse series, of which Pier Lights is the first.

The cover shows Morris Island Lighthouse, which has been decommissioned due to the water coming up over it so far there is no land access. It’s deteriorating and there is a group trying to restore it. It’s the perfect metaphor for Dio and Caroline who have also been knocked out of commission and need restoration. The sword in the sand shows part of Dio’s trade, and the little rowboat is a large part of the story.

ELLA: Ella M. Kaye is a pen name. Under my other name, I’ve been published for nearly ten years, have eight books released, and I’ve written in some form since childhood. Pier Lights is my first novel under this line.

ELLA: Read a lot, in many genres. Listen to established writers. Network. Be determined and develop thick skin. Get critiques outside friends and family. Realize that the first draft is the easy part and there is a long way to go from there. Study the craft of writing. Talent is nothing without the hard work of learning the trade. If you can give up on writing, you should. If you can’t, give it your all.

ELLA: I have a Sony that’s several years old and still suits me fine.

ELLA: I have a lot of Irish heritage, so I have a brisket marinating to become corned beef. It’s much better homemade than from the store! I may try to make Irish soda bread to go with it this year, and we’ll have a simple dinner with family and maybe a couple of friends.

Thanks so much for having me, Stephanie! I have a new blog, and I’m on Facebook, Twitter, and Google+. Pier Lights is on Goodreads if any of you review there. Find my links on my blog:
http://ellamkaye.blogspot.com

She moved back down the beach, out from under the pier, still along the water as it splashed her ankles. Just before she turned off to head back to her room for the night, a flicker of light over the water caught her eye. It was a moving flicker, similar to the lighthouse off and on glow as it turned its continuous circles around Sullivan’s Island, but far smaller. And far closer. She headed that direction. Caroline had always been too curious. Her mother had told her she was many times. It killed the cat, so the story went. Caroline figured she was safe enough since she wasn’t a cat. She’d gone well past her nine lives of curiosity and it hadn’t killed her yet.

As she got close enough to find the source of the flicker, out on the water but not too far out, she decided it might not be all that safe. A man. With a sword. On a small boat. Alone.

Her gut told her to turn away, to go back to her room, to shower and redo her toe nails and sleep, in case her answer would be yes. Although in all truth, she expected it not to be. She only wanted the option.

The flicker came from the sword as he twirled it around his body. Twirled wasn’t the right word. That was what Caroline did. Or what she used to do. It was a delicate, graceful movement. But then, so was this man. He was a delicate, graceful movement, if she could allow herself to stretch the definition of the word delicate. His precision was. As far as she could tell, the sword moved in exactly the same path, repeated, smooth, strong, graceful. It moved like a dancer, but more deadly.

Depending on its intent.

BUY LINK:
SMASHWORDS:
https://www.smashwords.com/books/view/285646
Posted by Stephanie Burkhart at 6:00 AM