A sneak peek at The Secret Door - paranormal romance 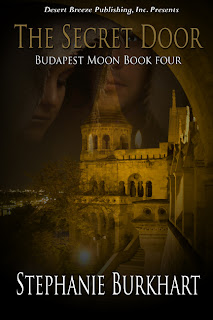 "The Secret Door" is Book 4 in the Budapest Moon Series.

Here's some back story:

Zoltan Kristos from book 3 is the hero in this one and he's after Lady Sophia Varga. It's 1927 in Hungary and Sophia is now an actress.   Can Zoltan save his witch, Inna, from an dangerous werewolf with Sophia's help?

"Inna has a concussion." Sophia paused, offering him a sympathetic smile. "She had a deep gash behind her ear when she came to us last night. Rita, Tomas' wife, stitched the wound, but her pupils are still dilated, and she's dizzy. Rita's with her now. As soon as Inna's better, Rita will send her to you."

"I have your word that's the extent of her injuries?"

"Yes." Sophia slid off his pajama bottoms, leaving only his undergarment covering his manhood. Then she took the jar of lotion and scooped out a handful, positioning herself near the end of the bed where his feet rested. As a wolf he needed the lotion, made of rose petals, camphor, and aloe, to heal his skin. Usually Inna applied the healing crème. Zoltan scooted toward the headrest, positioning his back against the board as he finished his drink. The liquid warmed his throat and heated his stomach. The elixir accelerated and augmented his healing factor, giving his muscles and joints a chance to recover from their distended positioning as a wolf. Even now he internally felt the muscles and bone coming together in the break of his arm, and he felt the skin mending in his shoulder. Still, it would take days for the injuries to fully heal, but days would be infinitely more tolerable than weeks.

He glanced at Sophia. Determination furrowed her brow. Zoltan appreciated her initiative and her desire to take Inna's place. Sophia had a giving heart, one Zoltan admired. He leaned over and grabbed the wooden tray off the nightstand, quite a feat for him since he wasn't that good with his left hand. There was a plate of food on it -- eggs, chicken, milk, and potatoes -- items that helped his healing factor as well. Starving, he shoveled the food awkwardly into his mouth.

Sophia rubbed the lotion onto his foot, and Zoltan drew in a sharp, involuntary breath. Adrenaline rushed through his limbs, sparking his feral attraction.

She continued her work, her firm hands expertly working the thick lotion into the deep cracks and pits of his feet. Relief was immediate. Zoltan tilted his head back and closed his eyes, savoring Sophia's caress. By the heavens, the woman had no idea what she did to him. His skin blazed with heat where she touched him – a combination of the healing properties belonging to the lotion and her caress.
Opening his eyes, his gaze fell upon the lovely young woman who remained focused on her task, rubbing the lotion onto his other foot now. Zoltan finished his meal and placed the tray back on the nightstand.

Sophia Varga was the one woman who haunted his thoughts. He had met her five years ago at the Harvest Ball, the night of his ennoblement. She lit up like an angel before his eyes, her golden aura matching and blending perfectly with his. Never once had she looked away from him that night. Instead, she gazed into his eyes without fear like she did now, and he appreciated that.