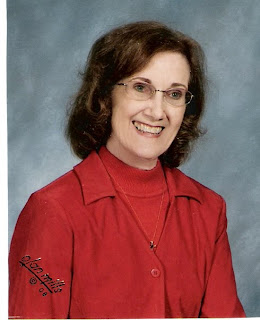 I'd like to welcome Beverly Stowe McClure to the blog today.

About Beverly: When Beverly was a child, she hated to read. Even though her eighth-grade teacher sent her poem “Stars” to a high school anthology, and it was published in Young America Sings, she hated to write. In spite of her rocky relationship with the printed word, she attended Midwestern University, read more books than she ever imagined, wrote tons of papers, and graduated with a teaching degree. Imagine that. As a teacher, she also read a lot. Reading Dr. Seuss and other great children’s books to her sons and to her students made her realize what she’d been missing: reading was fun. Now, she reads and she also writes. Her stories and articles have been published in leading children’s magazines. One article was reprinted in a Scott Foresman PreK-K Anthology. Her “Breakthrough” article appeared in the June 2007 issue of Writer Magazine. She has five novels for tweens and teens published with four more under contract, along with a picture book. Caves, Cannons, and Crinolines, a YA historical fiction, is her latest release. 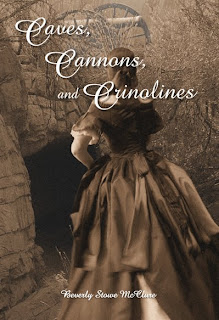 I had the pleasure to read Beverly's latest release and I thought I'd share my review with you.

McClure crafts a compelling young adult novel that takes place during the Civil war with Caves, Cannons, and Crinolines. (for those that don't know, a crinoline is a hoop skirt which was in fashion in the mid 1800's.)

Set in 1863 during the Yankee siege of Vicksburg, Mississippi, fifteen-year-old Elizabeth (Lizzie) Stamford's life has turned upside down. Her house has been shelled more than once, so her mother takes the family to a nearby cave. Lizze's family consists of twelve-year-old Nathan, her two older brothers, Willie and Joseph, and her father who is a surgeon in the local hospital.

Lizzie wants to help in the war effort and runs off, disguised as a boy, hoping to join the army. She meets two Confederate soldiers who befriend her, but she also witnesses events no one should see.

On her way back to her mother, Lizzie find a young Yankee soldier who is injured. Despite her better judgment, Lizzie takes him to her shelled out house and seeks out help for him. Nathan reluctantly supports her.

Lizzie gets to know the Yankee and learns his name is Private Benjamin Clayton. He heals in the house, but a rogue bunch of Yankees try to loot it. Lizzie is forced to shoot one. Ben soon leaves and Lizzie is left to wonder if she'll hear from him again.

McClure's writing is crisp. The plot flows well. The story is told in the first person from Lizzie's perspective, capturing the authenticity of the time and place.

McClure's characters are interesting. Lizzie is brave and daring, dressing as a boy to join the army. She looks fear in the eye and overcomes it when she decides to help Benjamin.

Nathan also embodies courage as he stands by his family. Joseph is shell-shocked when he returns from the war. Lizzie learns that sometimes things aren't what they seem and living is more challenging than crinolines.

Even though the story takes place during the civil war, young readers can understand the same hardships faced today when their loved ones deploy. "Caves, Cannons, and Crinolines" is a rewarding story that uses a subtle touch to show the reader what history is all about.