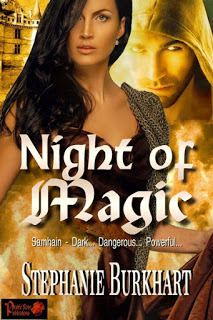 A great read in time for Samhain.

BLURB:It's 800 A.D. on the Emerald Isle and Samhain is the darkest night of the year. Five years ago, Prince Jasper lost his daughter, Aithne, to the world on the other side of the bonfires. Every year since, Jasper sends champions to this other world on Samhain when the barrier is at his weakest. This year, Finn braves the bonfires in search of Aithne, but dare he follow his heart or will his greed dictate his actions?

He kept quiet, only drawing a breath to tamp down his rising anxiety. He never cared to be restricted. Giving up control and submitting to another's will made him uncomfortable. His parents lost their lives when they trusted the soldiers from the east who invaded their homes. Finn swore he'd never trust anyone so blindly after that – but he had. Reluctantly, he had put on the mask, allowed himself to be taken by Darius, and had his wrists bound, and he'd hardly protested. Why? He needed to find the prince's daughter, but a part of him hoped to find the woman of his visions, too.

Darius placed his hand on Finn's shoulder and pushed him ta his knees. Finn snarled his displeasure. Darius had a problem with him – but what?

Finn swore the first chance he had, he'd give Darius a taste of his fists.

He felt the woman's presence in front of him before glancing up.

"Darius, rise with our…guest." Her voice was low and commanding.

Satisfied that he'd elicited a response from her, he looked her over. Right away Finn noticed that the queen was tall, standing over many of the men and soldiers in the room. She wore a small tiara made of gold, with a ruby seated in the middle. Her golden red hair flowed down her back in long, thick waves. She wore a silver gown with sleeves to her wrists. The fabric of the gown hugged the curves of her body. A leather belt fastened around her waist. His manhood thickened under his kilt. She was a fine woman. Finn noticed he was the only man in the room taller than her.

"My father's sent a man who is finally brave enough to walk through the bonfires, Darius."

REVIEW: 5 Stars, Amazon Review:his is an excellent piece of paranormal romance. It shows vampires in a new light, one where the purity of emotional connection is more important than the blood shared. I would definitely recommend this to anyone who likes historical fiction, parallel worlds, vampires or other paranormal lives.

Posted by Stephanie Burkhart at 4:17 PM