Advice from a Redwood #lifestyle #hiking 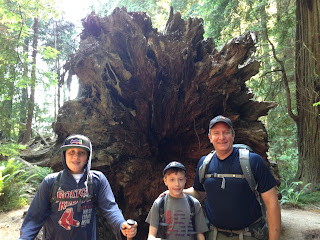 We're a camping family. We love to camp and this year we found a great place to explore - Jedidiah Smith State Park. It's about 5-10 minutes east of Crescent City, California, and Crescent City is the last stop in California before you hit the Oregon coast. Jedidiah Smith is home to some of the most beautiful trees in the world - the redwoods. 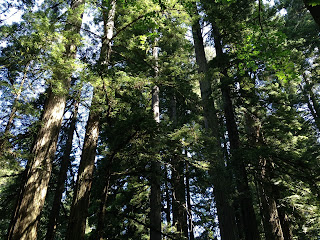 The redwoods have thick bark and can grow over 300 feet! Redwoods can live between 500--2000 years old. When I was visiting the trees, I found one that was close to 1500 years old. They thrive in moist climates and are generally found on the California and Oregon coast. This environment has the perfect mix - lots of rain/moisture hearty soil, and plenty of sunshine. For hundreds of years, this land was unexplored. Jedidiah Smith was one of the first explorers in this area in the 1820's. Even today, it's not heavily populated and there are a lot of mom and pop stores. 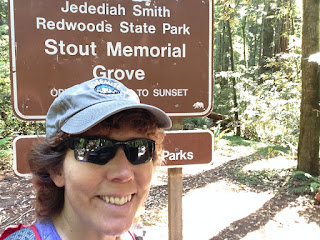 Our adventure started on a Friday. The trip was over 700 miles for us, so we left early and stayed overnight at a hotel when we got to the halfway point in Santa Rosa, which is about 30 miles north of San Francisco in CA wine country. After a good night's sleep, we left at about 10 am to finish our journey. 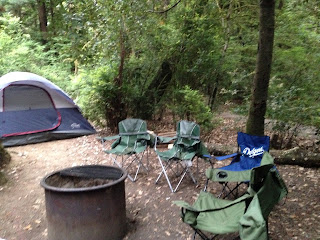 We arrived about 5 pm in Crescent City. After a stop at the local shopping store and a quaint Mexican restaurant that had some of the best Mexican I've ever tasted, we drove to Jedidiah Smith park and found our camp. It was spacious, with a bear box, fire ring, and a picnic table. We set up 2 tents and I roomed with my younger son, Joe. My husband shared a tent with my older son, Andrew. After we set up, we visited a ranger presentation called "Lions, Tigers and Bears." (The "tigers" were for tiger lilies which are abundant in the park.)  Tired, we slept on cots (a luxury!) in our tents, instead of air mattresses. 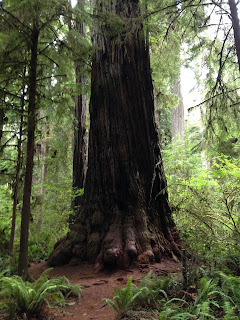 There are bears up in Northern California (NorCal). No grizzlies, just black bears, but you do have to keep your smellables in a bear box. The park had showers and family restrooms which was nice. The showers ran on quarters. I used it once. They were the best park showers I've ever experienced, but not quite like the showers we're used to at home. 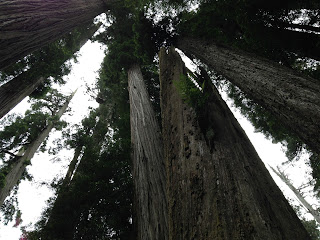 The next morning after coffee and camp breakfast, we were off to find some hikes in the redwoods. We discovered "The Boy Scout Trail," in the middle of the park. It's called that because 4.8 miles into the hike there's a tree named "The Boy Scout Tree." A troop of scouts doing trail maintenance in the 1930's found the tree and adopted it. We walked a tad further and discovered a waterfall. Then we hiked back. I was popped. For me, it was my favorite hike of the visit. The forest colors were extremely vivid. The birds chirped, and the smell of clean air invigorated the lungs.  For dinner, we had chicken and rice cooked up in our Dutch oven.  Quite honestly, it didn't look appealing, but it tasted great! 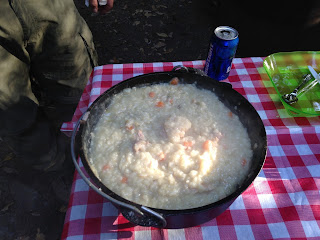 The next day was my birthday so we enjoyed a treat at the Starbucks in Crescent City and then we visited a lighthouse called Battery Point. We could only access the lighthouse during low tide so we had to return the next day. Visiting was a real treat for me. The lighthouse is maintained by volunteers.  It's very small. I had a chance to see the light.  It's very modern, but in a very tiny room.   For lunch, we had a bowl of clam chowder at the local seafood restaurant. Totally delish! I Yelped it a 5 star review and I don't give out a lot of 5 stars on Yelp.  After lunch, we took a hike along the coast, but after ½ mile the climb got steep. We went for another mile with a 900 feet elevation gain before turning around. Dinner was chicken and ribs and birthday cupcakes for desert, but the ribs were a bust since they were very tough. 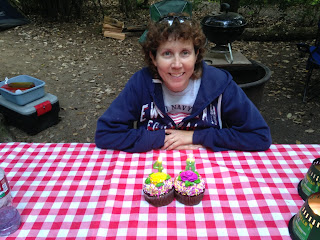 The next day we went to another side of the park and walked along the redwood groves. I found 9 banana slugs! The ground was damp and there was a mist hanging in the air. 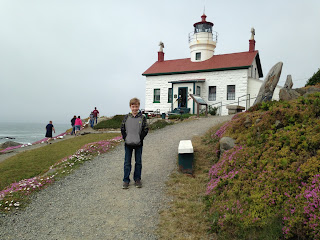 Our last full day we went to a redwood grove about 20 miles south called "Prairie Creek." It was another overcast, damp, misty day. We saw a tree called the corkscrew tree due to the fact it was 9 trees growing so close together it looked like a corkscrew. 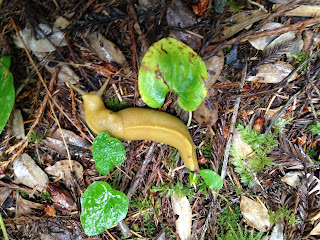 My souvenir for the trip was a wooden walking stick. Joe picked up a Yahteez game with a national park theme. 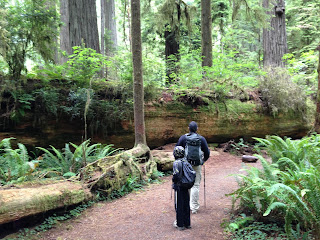 The next morning we took off at 10 am and arrived in Santa Rosa around 4 pm. I was never so happy to take a real shower in my whole life.

The redwoods paint a majestic picture. I was really impressed with just how tall they can grow. So, that said, I'd like to leave you with some sage advice from a redwood: 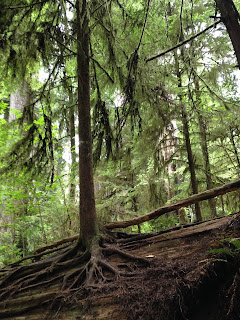 Stand tall and proud.
Sink your roots into the Earth.
Be content with your natural beauty.
Drink plenty of water.
Enjoy the food.

Question: Do you like to go camping?  Where's your favorite camping spot?
Posted by Stephanie Burkhart at 1:30 AM