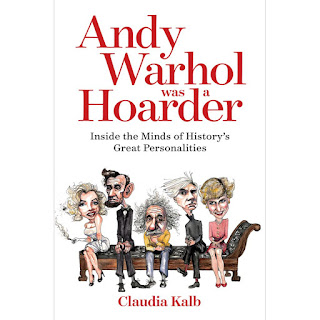 Book Review for: Andy Warhol was a Hoarder
Written by: Claudia Kalb
National Geographic Society
ISBN: 978-1-4262-1467-7
I read: the ebook

Kalb paints a picture of how mental illness has influenced some of the greatest personalities in history. Topics explored: Did Lincoln suffer from depression? Was Einstein on the autistic spectrum? Did George Gershwin have ADHD? There's also a look at Marilyn Monroe, Princess Diana, and Betty Ford. Many aspects of the human psyche are explored including OCD, hoarding, and transgender.

Each story discusses the historical surrounding of the celebrity's life, then Kalb makes her case for why that person had a mental health condition. Kalb gives the reader a fascinating look into what made some of history's most poignant characters tick.

Kalb's writing style is easy to read and engages the reader. Her tone is genuine and sincere. How Andy Warhol hid his hoarding behavior was the story that surprised me the most. Betty Ford's story was the one that touched me the most as it's a struggle many can identify with.

The book takes a psychological look at the unique people who have touched our lives. It's, fascinating, riveting, and engrossing. I highly recommend this book.

Posted by Stephanie Burkhart at 8:19 AM