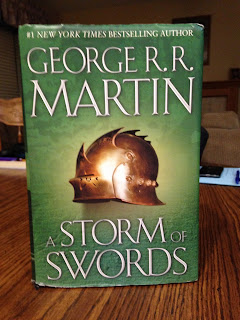 Martin pens a novel full of adventure, betrayal, and greed with “Storm of Swords,” book 3 in the “Song of Ice and Fire,” series. The novel is over 900 pages – not for the faint at heart – and a bit daunting. It’s taken me months to finish, and while it’s been long for me, it’s been an adventure.

Martin uses several point of view characters to tell the “Storm of Swords.” There’s Tyrion, smart and clever, yet a dwarf who is the butt of his nephew’s cruel jabs. There’s Robb, the King of the North, who must win the Frey’s favor or lose all he has gained. Jon, on the Wall, must find out information on the Wildlings and the Others, using all of his cunning to survive. Jamie must not only use his sword, but his wits to make it back to King’s Landing. Arya escapes the city only to find herself a captive and pawn to various outlaws who would use her as a hostage for their benefit. Stannis must prove himself a king, so he travels to the Wall, hoping to save it. Then there’s Daenrys, who learns how to use her swords to conquer, but she must learn to rule before returning to Westros. 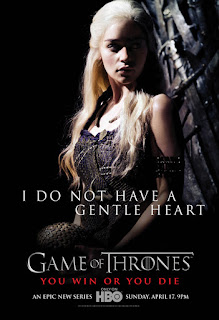 Every story involves violence, sword play, and cunning. As the realm loses its tenuous grip on the various kingdoms, secrets are revealed, proving a precursor to the upcoming battle between ice (the others) and fire (the dragons).

The characters are honest, real, and interesting. There’s good and bad and even some in between – like the “Hound,” Sandor Clegane. Everyone has a distinct motivation to do what they do, even if unknown to the reader. I’m always wondering what is driving a character.

A “Storm of Swords” grows the story, looks deeper into the players, and takes the reader on an adventure of a lifetime!

Question for you:  Who is your favorite "Game of Thrones" character?