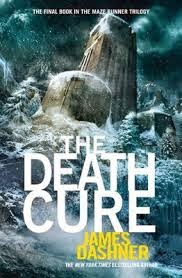 Dashner crafts an action packed ending to “The Maze Runner” series with “The Death Cure.” The killzone trials are done and Thomas is reunited with Teresa and his friends in WICKED’s headquarters. Only now, due to Teresa’s betrayal and WICKED’s secrets, Thomas is not very trusting. Dare he get his memories back so as to understand WICKED’s true purpose?

Thomas now understands the devastation the sun flares have done to the Earth. He comprehends now the release of the virus called “The Flare” has destroyed humanity. Ultimately, he has a choice – find a cure to the Flare or save humanity’s immunes to start all over again.

Dashner’s writing is crisp, sharp, and engaging. Thomas is a true hero, striving to do the right thing in the face of adversity. The supporting cast embodies friendship, loyalty, and a fierce conviction in their beliefs.

While the ending resolves the series in a satisfactory conclusion, I was a little disappointed in the resolution between Thomas and Teresa, as I feel it was sacrificed for the sake of an action packed ending.

Question:  Did you see "the Maze Runner" movie?
Posted by Stephanie Burkhart at 1:30 AM