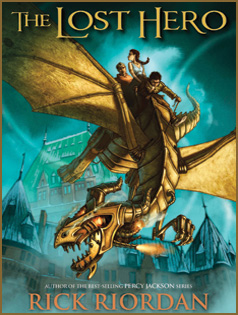 Riordan pens a gem of a story with "The Lost Hero." The novel opens with Jason, Piper, and Leo attacked by storm spirits on their way to Wilderness School. But Jason has a problem – he's lost his memories. Can he lead his friends on a quest to prevent Gaia from awakening?

The story introduces three new heroes to Camp Half-Blood and a new problem – Gaia, mother Earth herself. Jason, a son of Jupiter, is heroic, fierce and brave, but a little unsure of his abilities. Piper is loyal and true, but can she rise above the challenges and prejudices a daughter of Aphrodite faces? Leo loves to fiddle with his hands, but are his inventions a help or a hindrance on their quest? These new heroes will be given plenty of tests to prove their worth, but can they overcome challenge after challenge?

Riordan's writing style is sharp and witty, appealing to a young adult audience. The plot takes plenty of twists and turns. Jason embodies the classic Greek hero. Piper and Leo appeal to the modern audience as Riordan shows not only the character's vulnerabilities and insecurities, but also their strengths. Piper proves that true love is more than skin deep, and Leo shines as a hero from the school of hard knocks.

What Riordan does best is give Greek mythology a modern twist, attracting modern young adults.

"The Lost Hero's" story appeals to readers of all ages and genres. The novel's endearing characters and suspenseful plot will have readers on the edge of their seats. A definite page-turner! I highly recommend this book.