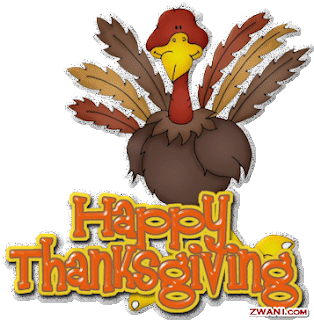 Back during the American colonial days, founding father Ben Franklin believed the turkey should be the national bird. Back in his time, turkeys lived in flocks, loved to fly, were wild, brightly plumed and cunning. Go figure.

Today, domestic turkeys are bred to have large breasts for their white meat. Because of this, the "toms" (the boy turkeys) are not able to fertilize the hens in the natural way. Most eggs are fertilized using artificial insemination.

Only the "toms" gobble gobble. The hens make clucking sounds. 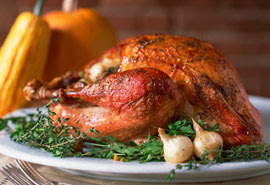 So what's the skinny with white and dark meat? It has nothing to do with blood. The legs and thighs are darker because they are a specific muscle type, different from the breast.

Turkey eggs are twice the size of chicken eggs and fertilized eggs take 28 days to hatch.

Interestingly enough, "The Christmas Carol" by Charles Dickens is given credit for making turkey the dinner of choice for Christmas.

The first president to pardon the turkey was Harry Truman in 1947. The National Turkey Federation presented him the bird, but Truman had pity on him. Truman's pardon continued on after him. Every year, newborn turkeys in April are picked as potential pardonees. These turkey live the good life in an air-conditioned barn, the best saw dust to sleep on, and the best food in their bellies.

In August, the "toms" pork out at 25 pounds. Only the top 6 toms – the largest and the most handsome, get picked for crowd control training. They get exposed to large crowds, clapping, noise, kids, and guys who look like the president. They're trained not to bite the kids, attack the president, or exhibit any unsatisfactory behavior.

Out of the 6, 2 get picked to go to the White House – the president and vice-president. (just in case something happens on the trip over)

After the big pardon, the birds to live in a luxury retirement farm called Frying Pan Park, but few make it to the next turkey day. Since they are bred to have large breasts, they can't support their weight and die within the year.

Thanksgiving is meant to offer thanks for our blessings and most of us celebrate in a fashion similar to the Pilgrim/Indian feast in 1621. I'd love to hear what some of your favorites foods are for Thanksgiving. Mine? Turkey wings, corn, clam chowder and blueberry pie.

Stephanie's Christmas release, "Christmas in Bayeux" is avail as a 99 cent read with Victory Tales Press. 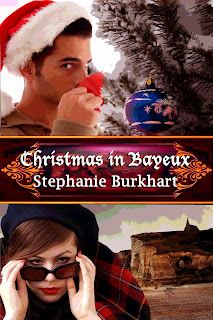 BLURB: Aiden seeks out his childhood friend, Noel, in Bayeux, France. Can she help heal his lonely heart and convince him Christmas wishes do come true?

Her cheeks reddened, but she only gestured toward the hall. "It's this way."

They entered the main room and he saw that the tapestry hung on the wall opposite of them. It filled the space entirely. Aiden stood stock-still, admiring its craftsmanship.

"We believe it commemorates the Norman conquest of England in 1066. We all call it a tapestry, but it's really an embroidery." She paused, then pointed. "Of course, the hero is William the Conqueror. His forces defeated those led by the English king, Harold Godwinson."

Aiden walked the length to the tapestry, marveling at the story and how the work had been well preserved for close to 1,000 years.

"Edward the Confessor had no heir so he sent Harold to tell William he would rule England once Edward died. Harold, however, usurped the throne."

Aiden pointed to a star with a tail. "Is that a star?"

She grinned. "Modern interpretation believes it to be Haley's comet. It was a bad omen for Harold."

"Silly me. I should have known that." He grabbed her waist and pulled her against him. Their eyes locked, hers smoldering with desire. Damn. He wanted to kiss her. Right now. Screw his willpower. Aiden grabbed her hand and led her to the nearest hallway. Empty, thank God.


BOOK TEASER ON YOU TUBE: http://www.youtube.com/watch?v=-muZ0dhOvSE

FIND ME ON THE WEB:


GIVEAWAY: If you post a review on Amazon, Barnes & Noble or Smashwords between now and 1 DEC, then your name will go in a hat to win one of two decorative cloth Christmas trees made by my crafty friend, Lori Powell, along with some Yankee Candles and Chocolate. Be sure to return here and post in the comments that you posted the review along with a contact email.
Posted by Stephanie Burkhart at 6:00 AM