Joe and I at the SB Zoo last year 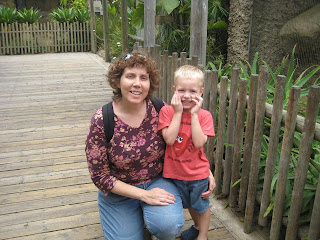 Santa Barbara is a beautiful city approximately 75 miles north of LA on the California coast. I've been there several times myself. I love the view of the ocean. The city is built on a set of gentle rising rolling hills overlooking the coastline. One of my favorite places to visit is the zoo. It's low-key and not very crowded. You can lazily stroll through it without feeling rushed and enjoy the animals.

Being a bit of a wino, I'm a sucker to visit the Santa Barbara Winery. I haven't been in a while, but I remember enjoying the reds and the ambience of the storefront. (Hard to now with a 4 year old.)

Santa Barbara is home to one of the missions, which were founded in the 1700's by the Franciscan monks that traveled up the California coast from Mexico. I visited the mission several years ago and was struck not only by it's beauty, but by its functionality. 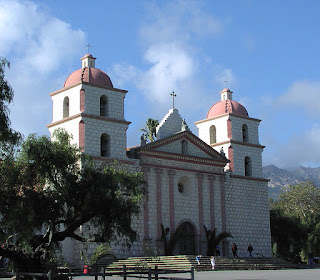 Just a little about the mission's history. It was founded as part of the Franciscan Missions on 4 DEC 1786, on the feast day of St. Barbara. The intent was to convert the local native American tribes – the Chumash and Barbaernó. Over the years, the mission was devastated by earthquakes and rebuilt. The last time it was rebuilt was in 1927.

The city of Santa Barbara grew up between the mission and the coast. Presently, the mission still celebrates Catholic Mass. The local parish rents the mission from the Franciscans. 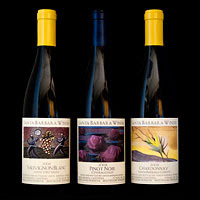 Whenever I visit the city, I try to swing by the winery and the mission.

Smiles
Posted by Stephanie Burkhart at 9:07 AM