Review for Philippa Gregory's: The Lady of the Rivers 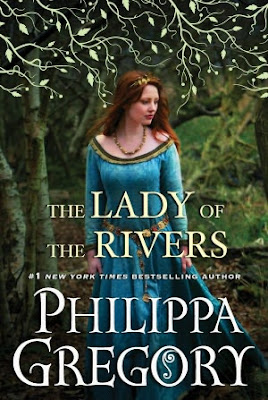 Gregory spins a story full of greed, betrayal, danger, love and loss with "The Lady of the Rivers," book three in her "Cousins' War" Series. The novel tells the tale of Jacquetta Woodville, the mother of Elizabeth Woodville, who was the wife and Queen of Edward IV.

John, Duke of Bedford and Regent of France, marries Jacquetta, hoping to put her talents to good use. Jacquetta meets a young squire, Richard Woodville. A fondness grows between her and Richard. John takes Jacquetta to England where she meets his nephew, the King of England, Henry VI. John dies and Jacquetta marries Richard. She becomes a member of the Queen's court. As Henry VI descends into madness, dare Jacquetta call upon her gifts to foretell what will happen to England?

Gregory brings history alive in a rich, vibrant, emotional, and personal way that engages the reader and keeps them turning the pages. She's done her research and it shows, but she's also taken fictional liberties with some of the events. What I like is that she blends fact and fictional effortlessly and she paints the situations in such a way to allow the reader to draw their own conclusions. For me, the best part of her writing is how she lets the characters' humanity shine, good or bad.

The book is written in the present tense from Jacquetta's perspective, which I found a bit disconcerting, as I prefer the past tense, but it not take away from storytelling.

"The Lady of the Rivers" is a fascinating story about a complex woman that had the ear of the men and women who defined an age.

Posted by Stephanie Burkhart at 8:59 AM

Email ThisBlogThis!Share to TwitterShare to FacebookShare to Pinterest
Labels: book review Tuesday, history, Philippa Gregory, The Lady of the Rivers