Hi all - Just wanted to share a little about the Space Shuttle Endeavour as it makes it way through Los Angeles on it's last journey. 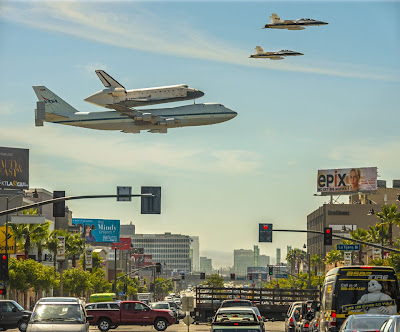 Endeavour descending for a landing into LAX.
Memories
In 1981 I remember I was in 7th grade and my science teacher brought in a TV and we watched the Space Shuttle Columbia blast off in space and I felt a chill down my spine. I knew that moment was special and it's been a memory that's stayed with me. I was proud to see America's space journey continue. 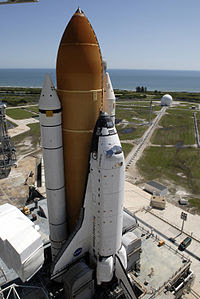 Endeavour on the lauchpad.
In 1986, I was a senior at Manchester Central high school in Manchester, NH and I was in math class - Algebra II. The class just started. Miss Mantineo was on the board writing problems and an announcement came over the loudspeaker that we'd lost the space shuttle challenger and Christa McAuffle. I bawled like a baby. Half the class. Miss Mantineo was so shocked, she stumbled back to her chair and sat there stunned. Again, the memory is so poignant, I can still see it in my mind over 25 years later. 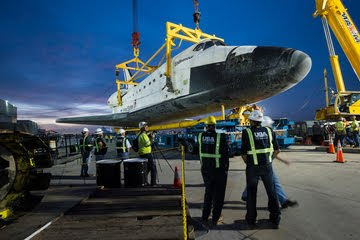 Endeavour being placed on it's transporter.
Endeavour was the fifth and final spaceworthy NASA space shuttle to be built, constructed as a replacement for Challenger. It first flew in May 1992. 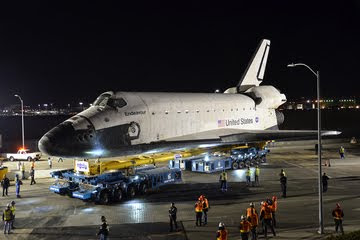 Endeavor leaving LAX.
I was working the 911 phones for LAPD when Endeavor began it's journey though the streets of LA. Endeavour's last flight into space was May 2011. 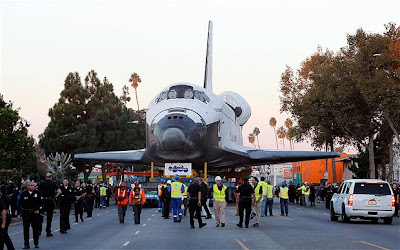 Endeavor crusing through LA at 2 mph.
NASA chose to build Endeavour from spares rather than refitting Enterprise or accepting a Rockwell International proposal to build two shuttles for the price of one of the original shuttles, on cost grounds.The orbiter is named after the British HMS Endeavour, the ship which took Captain James Cook on his first voyage of discovery (1768–1771).[5] This is why the name is spelled in the British English manner, rather than the American English ("Endeavor"). 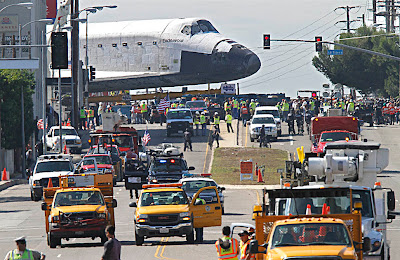 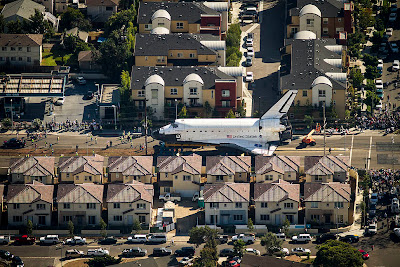 It's not everyday the space shuttle passes through ordinary streets.
The Space Shuttle Endeavour will spend it's retirement at the California Science Center in LA. 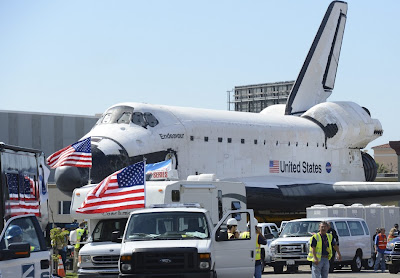 It's due to arrive later on today. I'd love to hear your thoughts, memories, impressions, opinions on the space shuttles. I hope you've enjoyed the journey as I have.

Posted by Stephanie Burkhart at 3:33 PM