Book Review Tuesday: To The Nines by Janet Evanovich #bookreview 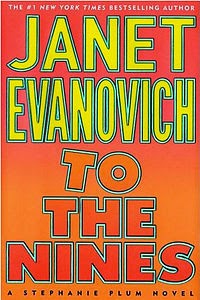 Stephanie Plum is up to her usual tricks when she gets assigned to find Samuel Singh, an illegal immigrant who has jumped his immigration bond. Ranger, her co-worker, is put on the case, too, but the leads are slim.

Stephanie and Ranger soon learn that Singh's disappearance is tied to random events and people. Stephanie investigates Singh's place of employment, TriBro. The Cone brothers, Andrew, Bart, and Clyde run the establishment. Soon, Stephanie begins receiving death threats along with red and white carnations. Still, Stephanie doesn't give up and even takes a trip to Las Vegas in the hopes of finding Singh. Stephanie knows she's a target, but finding who's behind the flowers and the death threats will be her biggest challenge to date.

Evanovich's writing is easy to read and completely engages the reader. She uses a solid first person voice that makes the reader feel like a part of Stephanie's world. Her supporting characters are honest and endearing. Lula is a true friend, Ranger an anti-hero, and Grandma Mazur tries to keep the family peace as Stephanie's sister, Valerie, prepares for birth.

The story is a cozy mystery with plenty of well placed clues and several red herrings. "To The Nines" has adventure, nail-biting suspense, laughs, and plenty of heartwarming moments. It is good for 13 years old readers and older. The novel is a fine addition to the series. I highly recommend this book.

Question: Who is your favorite character in the series?