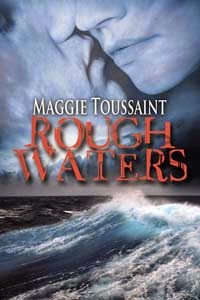 Maggie Toussaint pens a taunt romantic suspense with "Rough Waters." Rock MacKenzie arrives in Mossy Bog intent on finding one thing – the missing coins he discovered on a dive. He's convinced Jeanie Munro's ex-husband, Avery, might have taken them. Rock meets Jeanie with the intent of her leading him to Avery, but soon discovers Jeanie has no insights into her ex-husband's whereabouts. Rock learns he's attracted to Jeanie and feels bad when her house is burglarized.

Jeanie can't deny the attraction she feels for Rock, but her priority remains with her young children. In order to keep them safe, she sends them away and actively helps Rock seek the treasure he's looking or. Rock doesn't know what to make of his confusing clues, but when Jeanie's life is put in jeopardy, he's forced to come to terms with them in order to save her life.

Toussaint's writing is engaging, filled with several twists and turns leaving the reader anxious to find out what happens next. Rock is loyal, protective, and determined. Jeanie is a modern heroine. Not only is she gutsy and intitutive, but when it comes to her kids, she puts them first. Both the characters are strong, likable leads. The supporting cast embodies southern hospitality and there's no shortage of suspects.

"Rough Waters" is a romantic suspense novel with several main stream love scenes. It's the 3rd book in the Mossy Bog series. The book stands alone in the series and embraces several elements of heightened suspense as the previous books did. I would definitely recommend it. "Rough Waters" is a page turner!

Question for you: What's your favorite romantic suspense show on TV?
Posted by Stephanie Burkhart at 4:07 AM