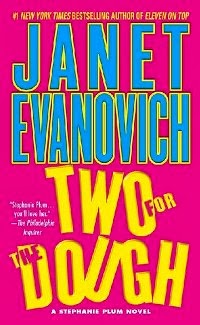 Evanovich pens a deliciously satisfying sequel to her Stephanie Plum series with "Two for the Dough." Set in contemporary New Jersey, Stephanie is a bounty hunter. Her task? Bring in Kenny Mancuso. It's a windfall, but catching Kenny proves a challenge.

"Two for the Dough," effortlessly captures the fun of the first novel. Joe Morelli is back as a vice officer on the hunt for Kenny and as a distraction for Stephanie. Grandma Mazur is just as crazy as she was in the first novel, but now she's got a .45 magnum. Stephanie's also hired to find 24 lost coffins by Spiro. She's got her hands full.

Stephanie's still a novice at bounty hunting, but soon learns Kenny, along with his buddies, Moogey and Spiro, were up to smuggling weapons. Everyone wants a piece of Kenny – his ex-girlfriend, Spiro, the cops, and of course, Stephanie. Can she get the "dough" before Kenny carries through on his threats?

Evanovich's writing style is easy to read and thoroughly engaging. The supporting cast of characters also add their own spice. The plot is very solid. Evanovich plants subtle clues that are easy to miss between the hijinks and deadly intentions. Evanovich captures elements of humor, mystery, crime, and romance and bundles them all up in a great story. "Two for the Dough" is a definite page turner.

Question: Are you a Janet Evanovich fan?  What's your favorite novel by Janet?

Smiles
Steph
Posted by Stephanie Burkhart at 4:00 AM