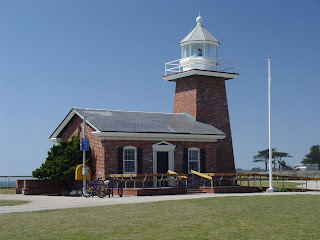 Located on the northern shore of Monterey Bay, the Santa Cruz lighthouse was originally built in 1868.

I've always enjoyed visiting the ocean, and while I've never seen too many lighthouses, I find them fascinating. They capture the ambience of the romance of the seas. Each lighthouse has it's own unique story which I hope to share with you during these series on California Lighthouses.

The Santa Cruz lighthouse has a rich, sentimental history. It was a wooden structure with a tower modeled after the light at Ediz Hook, WA. Originally, the light was white, but soon was changed to red, so it could be distinguished from the various residential lights in the area.

Interestingly only ten years after it was built, the lighthouse faced destruction from erosion. It was moved 300 feet to firmer ground by several horses. The mover was paid $750.00 for the job! (in 1879)

What gives a lighthouse its personality are the people who care for it though. Every lighthouse has a story.

The Santa Cruz lighthouse's first caretaker was Adna Hecox. He moved into the lighthouse with his family in 1870. He provided for his family by growing a garden and keeping chicken. He passed away in 1883 and his daughter, Laura, become the next caretaker. 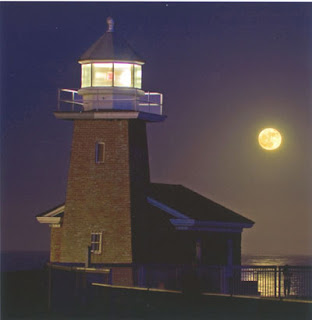 Laura was paralyzed on one side of her body, but she didn't let that slow her down. She became an avid amateur marine biologist, well respected by her peers and professors around the country. She retired in 1916.

Arthur Anderson became the caretaker after Laura. Electricity made his job easier. He retired in November 1940 and in 1941, the Coast Guard assumed responsibility for the light. With World War II, the Coast Guard turned the lighthouse into a lookout and the 54th Coast Artillery Regiment, an all-African-American unit, was assigned to the lighthouse with the mission to protect the coastline.

In 1948, the lighthouse, was dismantled, and it's lumber was used for other projects. In 1965, a family tragedy would give Santa Cruz a new lighthouse.

Mark Abott was 18 and drowned while body surfing off the waters 3 miles east of Santa Cruz, Mark's family, knowing his love for the ocean and lighthouses, built the Mark Abbott Memorial Lighthouse on the land the old lighthouse had stood on.


Do you have a favorite lighthouse you like to visit?
Smiles
Steph
Posted by Stephanie Burkhart at 6:00 AM