Book Review for: Killing the Rising Sun by Bill O'Reilly and Martin Dugard 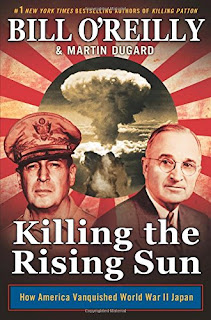 Book Review for: Killing the Rising Sun
Written by: Bill O’Reilly and Martin Dugard
Published by: Henry Holt
ISBN: 978-1627790635
I read:  the ebook

O’Reilly and Dugard pen an engaging novel about the end of World War II in the Pacific with “Killing the Rising Sun.” The Japanese are resilient, courageous, and willing to fight to their last breath to win World War II. However, in the early months of 1945, it becomes apparent that the Japanese cannot win the war. Determined, they will defend every bit of land they possess.

Under orders from FDR, the Americans strive to build the atomic bomb. Known as “The Manhattan Project,” this devastating weapon might be the only leverage to get Japan to agree to unconditional surrender.

O’Reilly and Dugard’s writing style is easy to read. They relate the personal stories of not only the major players including FDR, Truman, and Douglas McArthur, but also the soldiers who fought for freedom. Historical facts, long forgotten, will surprise the reader.

The title, “Killing the Rising Sun,” is symbolic in that Japan as a country, known as the ‘rising sun’ had to be defeated in order to be reborn again as the nation it is today.

O’Reilly and Dugard deliver another fascinating read in their “killing” series. The facts will keep readers turning the pages. Engaging, engrossing, and suspenseful, this one “killing” that will resonate long after it’s finished.

Comments: While I'm NOT a fan of O'Reilly, not in the least, I do enjoy his "Killing" series. Which "Killing" book have you read that's been your favorite so far?

Posted by Stephanie Burkhart at 4:27 AM