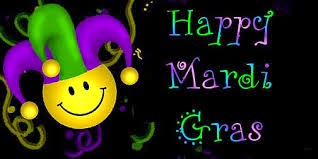 Gotta' thank the French for bringing Mardi Gras to the states. They sure know how to party before Lent starts. Literally translated, "Mardi Gras" means Fat Tuesday in English. It's meant to be a celebration before the penitential season of Lent starts on Ash Wednesday, but the origins and traditions of Mardi Gras go all the way back to the heyday of Rome.

In ancient Rome, they celebrated a circus-type festival called "Lupercalia" which was very similar to Mardi Gras as we know it. Popular traditions and practices today include wearing masks, dancing, parades, and overturning social conventions along with a little general debauchery.   I remember when I was stationed in Germany, one tradition would be when the women would go into a bar and cut off a guy's tie with scissors. The guy was hers for the night to do whatever she wanted. Wild, huh? The Germans call Mardi Gras "Fasching" and traditions vary from place-to-place, country-to-country.

When Rome embraced Christianity, the early church decided it would be wise to incorporate some aspects f pagan rituals into the new faith. In regards to Lent, the ritual of Lupercalia evolved into the 'debauchery' of Mardi Gras.

Most of Europe and Brazil call Mardi Gras "Carnival." In some places it starts in November, and in other places, it starts the day after Epiphany.

Mardi Gras made its way to America in the early 1700's when the French explorer, Sieur d'Iberville, settled the Louisiana/Alabama area; however the 1st recognized Mardi Gras in the States wasn't until 1827 in New Orleans. A group of students, who had recently been to Paris, put on costumes and danced through the streets.

WHAT ABOUT THOSE COLORS?

In 1872, Russian Grand Duke Alexi Romanov visited New Orleans. He was given the opportunity to pick the Mardi Gras colors. He choose purple, representing justice, green for faith, and gold meaning power.

Me, personally, I'm a believer in moderation. I generally don't do much for Mardi Gras except wear beads and smile. Lol!!

Question for you: Do you celebrate Mardi Gras?  What do you to celebrate?
Posted by Stephanie Burkhart at 3:58 AM