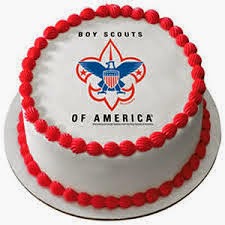 I got involved in scouting when my husband’s work schedule was switched up and I had to be the parent who took Joe to his meetings. I soon discovered scouting was a lot of fun (even for parents!)  and introduced a lot of great values to the boys – reverence for the country and God, respect, courage, outdoor skills, respect for the environment, and I could go on. Scouting really does promote a positive atmosphere for boys at an early age that they can carry forward in life.

I have Lord Baden Powell to thank. His extraordinary vision began the scouting movement. He was a British officer who participated in the Boer War in the late 1800’s. Upon returning to England, he took 20 boys camping off the southern coast and scouting was born.
Baden Powell believed scouting built character, citizenship, physical fitness, spiritual, mental, and emotional strength. He wanted peace and believed that the values which promoted peace started with the young people of the world. He began a “cubbing” program in England in 1914 basing a lot of his cub scouting elements on Rudyard Kipling’s “Jungle Book.”
Scouting in America had its start when Chicago businessman William D. Boyce got lost in the fog in England. An unnamed boy scout did a ‘good turn’ and helped Boyce find his way to his destination.

Boyce was so impressed with the boy scout’s demeanor, he brought scouting to America. Upon his return from England, on 8 Feb 1910, Boyce incorporated the Boy Scouts of America.
“Cubbing” as it was called in America started in 1930, incorporating elements from Kipling’s “Jungle Book,” like “law of the pack,” “Akela,” “wolf,” “den,” and “pack” along with Native American elements such as “gold and silver arrow points,” “Webelos,” and “arrow of light.”
As I begin my cub scouting adventures, I’m learning a lot about scouting and what a dynamic program it is. It’s changed several times over the years as the decades have changed. Cub scouting was originally known as “Cubbing.” In 1945, it became “Cub Scouting.” As early as 1912, “Boy’s Life” magazine was the official magazine of the scouts. In 1967, “Webelos,” replaced the Lion rank and in 1976, women were allowed to become Cubmasters.
Nowadays you can find scouting in 190 countries. 8 Feb is the anniversary of scouting in the States. It’s also celebrated as Scout Sunday as approx.. 50 percent of charter organizations involved are churches, synagogues, and other religious organizations. Most Cub Scouting Packs host their Blue and Gold in February. The Blue & Gold banquet is intended to recognize the scouting anniversary in the U.S.
This year I attended the Blue and Gold as the full-fledged Den Leader of Den 1. It’s a bit overwhelming to think I’m in charge of 5 boys’ cub scouting adventures, but I hope to have fun and “teach” the boys without them realizing they’re “learning.” I introduced “Barry” the Bear (our den mascot) and made a Bear Board. I’ve planned several “go-see-its” including the Reagan Library, Castaic Lake, Mountain High for snow tubing, and a beach clean up at Carpentaria state beach.  I hope to share the adventures with you as the year goes on!

Question for you: Do you have a scout? Boy or girl? Are you involved in scouting? I’d love to hear from you.
Posted by Stephanie Burkhart at 1:30 AM