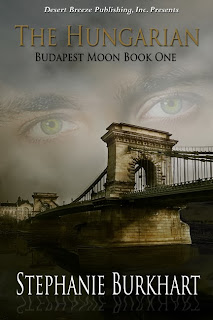 It's almost time for the October 2013 Coffee & Chocolate Contest.  This month's contest will feature book 1 of the Budapest Moon series: The Hungarian!

GRAND PRIZE: Win a GC to Starbuks, a coffee mug, a bag of chocolates (Andes mints) magnets, and a Lori Powell original book bag. All you have to do to enter is visit my Facebook Fan page between 26 -31 OCT and leave a comment on any one of the Coffee and Chocolate Posts. Every time you comment, you'll be entered in the "hat" for the grand prize drawing.

Winner will be announced on my Facebook Fan Page and here on 1 NOV . Previous winners are listed on the bottom of my website at: http://www.stephanieburkhart.com

No purchase necessary
I will ship Internationally.

BLURB for The Hungarian:

Katherine Archibald is in search of a grand adventure. A young woman in late Victorian England, she wants to open up a book store in London and travel Europe hunting down rare books. Love isn't on her map.
Enter Matthias Duma. The Hungarian count captures Katherine's attention like no other man before him with his unusual gold-malachite eyes, his exotic features, and his command of the night sky.
After a night of intrigue during Katherine's birthday, she discovers the map does include love in the legend, but will the map lead her to Budapest and the dark, brooding Hungarian she's just met?
EXCERPT
The door squeaked open and Katherine peeked over the top of her book. A tall, muscular man walked in wearing a white button-down shirt and holding his blazer. He paused, as if surprised to find her, and then walked toward the window, his stride easy. He moved with wolf-like prowess, his long legs taking cool, calculated steps as his unusual eyes surveyed her. Katherine bit the inside of her lip, returning his measured perusal with one of her own. His silence was unnerving, yet intriguing.
His eyes drew her to him -- malachite green with a gold ring around the iris. Dynamic. Expressive. Even now, as he looked at her, they softened and grew translucent. He stopped in front of the window and casually threw his blazer onto a nearby chair as if he owned the room.
"Hello," he said.
"Hello."
"You're staring."
"I am? I thought you were staring at me."
He chuckled. "Perhaps I was admiring you."
"Me?"
"Who else is here?"
Katherine pursed her lips as her insides warmed from the deep silkiness of his voice. He smiled and walked to her chair, slowly gliding around it, tracing his finger over the leather headrest, skirting her curly hair.
"What's your name?" he asked.
"And who is inquiring?" She tried to sound cool and composed, but she had to fight the nervous temptation to play with her hands.
"Romeo, perhaps?"
"Then my name is Juliet."
A teasing smile graced his lips as he walked out from behind her chair and glanced at a bookshelf before turning to look at her again.
"Would you fall for Tristan?"
"Only if my name were Isolde."
He walked over to a wooden table near the window and ran his long finger over a clay mock-up of Excalibur lodged in a stone. "What do you think of Arthur? Do you think it suits me?"
"Only Guinevere would believe your name was Arthur."
He crossed his arms, his eyes sparkling in the sunlight. "Would you believe my name was Matthias?"
"I might, if--"
"If what?"
"If I knew more about you."
REVIEWS:

Happily Ever After Reviews,  5 Cups
"This is an excellent book and I think fans of both the paranormal and historical romances will really, really enjoy it."

Hope Chest Reviews - 4 Hearts
Overall, The Hungarian was a pretty good read. Stephanie Burkhart is good at telling an interesting story that holds my attention.

You Gotta Read Reviews - You Need to Read, Lupa
I was so very happily surprised by this book. The characters are enchanting, the scenes are vividly written, and the story has a fantastic flow. I really enjoyed the warm love and fiery passion that seemed to leap off the page.

Sizzling Hot Book Reviews, 5 Hearts
"I highly recommend The Hungarian, even if you aren't that interested in the paranormal such as werewolves. The romantic tale of The Hungarian is enough to win over anyone."

Reader's Favorites, 5 Stars
"This book is extremely entertaining. The plot is sensual and romantic."

Coffee Time Romance, 3 Cups
"Ms. Burkhart tells this tale in such a voice that we can practically feel the waves of emotions both characters are feeling coming off the pages."

BOOK TRAILER ON YOU TUBE:
http://www.youtube.com/watch?v=MZwaF8hAdow