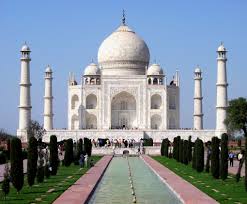 I've never been to India, so understandably, I'm a bit nervous writing about the Taj Mahal. I remember though in 7th grade, my social studies class conducted a look at India for a semester and when I saw a picture of the Taj Mahal, it took my breath away. Just picture a young 13-year-old, eyes wide open - my mouth slightly agape as I drank in the wonder of the structure. In that moment my heart knew one thing – a picture could not do the Taj Mahal justice. This was a building that needed to be seen in person. Sadly, I haven't had a chance to do that yet.

I suppose the thing that has resonated with me throughout the years was knowing the Taj Mahal was built for a king's (Shah) wife who died in childbirth. What an amazing testament to love.

The Taj Mahal is in Agra, Uttar Pradesh, India. Construction began in 1632. (Charles I is on the throne in England, to give you a little perspective) The main building, the mausoleum was finished in 1648 (the year before Charles' died) and the surrounding gardens and structures were finished five years later. Materials from all over India and Asia were used. Over 1,000 elephants helped transport the materials. They include white marble, crystal, turquoise, Lapis lazuli, sapphires, and carnelian.

During the 1600's, the Mughals were the Muslim rulers of India. Shah Jahan ruled during a period of great prosperity, but became grief stricken when his 3rd wife, Mumtaz Mahal died giving birth to their 14th child. He employed the best architects of his times to build a beautiful mausoleum for her.

I can't begin to describe the Taj Mahal, but I will say importance was place on symmetry. This attention, at least for me, is what gives the Taj Mahal it's majestic beauty.

What happened to Shah Jahan after his wife's death? Shortly after the Taj Mahal was finished, his son deposed him, placing him under house arrest. When Jahan died, his son buried him next to his wife in the Taj Mahal. 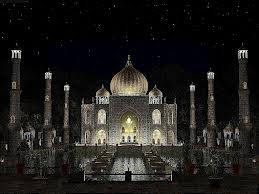 Nowadays the beauty of the Taj Mahal is threatened by environmental pollution. The pollution has slowly been turning the structure yellow. Currently, there is a 4,000 square mile zone around the Taj Mahal in which strict emission standards have been enacted.

Also, due to a lack of water in the Yamura River, the wooden supports may be rotting, compromising the mausoleum's structural integrity. Only 5 items are allowed in – water in see-through bottles, small video cameras, still cameras, mobile phones and small ladies' purses.

Question: Have you seen the Taj Mahal? What was your first impression? 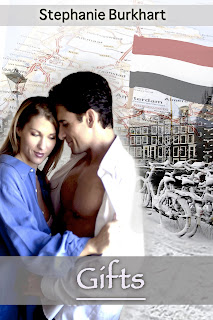 My new 99 cent contemporary romance is now available on Amazon for Kindle.

BLURB: A sweet contemporary romance novelette from the award winning author of  "The Budapest Moon Series."
Figure skating is in Christian Jansen's blood. When he trips on uneven ice and drops his partner, Chris breaks his arm. Now he's looking for a second chance.Famke deVries lost her skating coach four months ago. Needing to connect with her roots, she returns to Amsterdam and agrees to be Christian's new skating partner. Christian and Famke connect on a deep level, understanding each other's losses, but will their chemistry off the ice interfere with their goal to go to the Olympics?