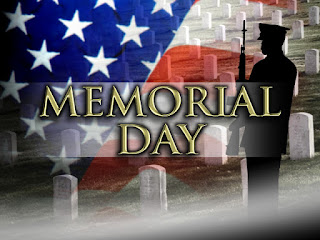 Traditionally set as 30 May, Memorial Day is celebrated on the 4th Monday of May. It's a day intended to remember the people who died while serving in the US Armed Forces.

In 1986, I joined the US Army. After electing to become an MP (military police) I went to Ft. McClellan, Alabama for my basic and advanced training. Alabama in the summer was muggy, humid, and warm, but the stuff I learned instilled a sense of pride in me that still resonates today.

Memorial Day was born out of the ashes of the American Civil war, to honor those who died on both the Union and Confederate sides. (Veterans Day is intended to honor all the US military veterans, living and dead.)

I served 7 years overseas in the German cities of Muenster, Fulda, Bad Hersfeld, and Hanau. On several occasions my squad raised and lowered the US Flag on military installations. There's nothing more inspiring than raising the flag.

In May 1868, Union General, John A. Logan issued a proclamation calling for "Decoration Day" to be observed on 30 May. He picked this day not to honor a battle or a heroic action, but because he knew it was a good time for the flowers to be in bloom.

Remember the context of the times – there was no Internet, TV, or Radio. Simply placing a flag or flowers over the graves of the war dead was the best way to honor those who gave their lives in the military for others. This most solemn tradition continues today.

I served in the Army for 11 years during the last years of the Cold War and before the War on Terror. Several people from my PLDC (Primary Leadership Development Course, needed to pin on Sergeant stripes) served in Gulf War I.  It's not easy sometimes to give up your own personal sense of freedom, but those I knew, and myself included, did so because we all shared an unspoken pride in serving our country. That was the glue that held us together. We may have said "I’m here to earn the G.I. Bill," or "I wanted to see the world," or "I was looking for an adventure," but it was the unspoken pride in our nation that inspired us to be all we could be. It's that unspoken pride soldiers from the Civil War, Calvary from World War I, airmen, seamen, and marines embraced in World War II, and then men and women in today's Armed Forces share. It's our common denominator.

Decoration Day was initially used as a term in 1882. It wasn't changed officially to "Memorial Day," until 1967 by an act of congress.

All I ask is for you today is to take a few minutes out to share your unspoken pride with others. If you have a loved one or know a friend who died in service, place a flag or some flowers next to their resting place. If, perhaps, it's not practical, fly a flag today or stop around noon and say a prayer. In the afternoon, enjoy a start of summer BBQ. I intend to. 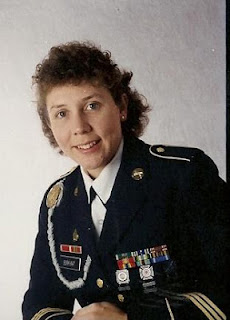 Author Bio: Stephanie Burkhart is a 911 dispatcher for LAPD. She served in the US Army from 1986-1997. She achieved the rank of E-6, Staff Sergeant. Her highest military award is the Army Commendation Medal (3x). From JUL-OCT 1997, she was deployed to the Taszur Air Base in Taszur, Hungary in support of Operation Joint Guard.

Her story, "Journey of the Heart," is a vintage romance that takes place in California in 1946. Her hero, James DiMera, served in World War II. When he returns home, he learns he has no home to return to. Can he find a new purpose and sense of worth on Rachel's winery?
Posted by Stephanie Burkhart at 4:00 AM