Welcome Shelley Munro & the sport of Rugby to the Football Blog Tour Stop! 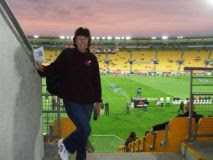 A palpable excitement fills the air in New Zealand at present. People are huddled around the telly, making the journey to Party Central, and those lucky enough to have tickets are rocking up to stadiums around the country.

It’s Rugby World Cup year, and teams from around the world are competing for the Webb Ellis cup plus bragging honors.

The All Blacks, the New Zealand team is currently ranked the number one team in the world, yet we haven’t won the cup since 1987, the first year the tournament was played. The pressure is on our boys to do well since they’re on home territory.

Pool play, which has been taking place during September, is almost finished, and it’s time for the serious part of the tournament to take place. The All Blacks are playing well, but we had terrible news overnight. One of our key players is injured and out for the rest of the tournament. I must say…I’m feeling a little nervous about our chances of pulling off a win without one of my favorite players, Dan Carter.

So why am I such a rugby fan?

Rugby is our main winter sport. It’s a team sport with each team consisting of fifteen players. From a young age, I loved to kick around a rugby ball. At that time, women didn’t play rugby, so my love of the game focused on watching rather than participating. It’s a fast, skilful game. Players need to work together to get past the opposition team. Oh, and it’s no hardship watching fit, muscular men run around in tight shorts and a rugby shirt. I like the team aspect, the skill required and all the technical, behind-the-scenes coaching stuff fascinates me.

And who is my favorite player?
That’s a hard one because this years All Black’s team is full of very talented players—a combination of younger players and more experienced ones. Let’s just say I like the All Blacks, full stop.
Mention the subject of rugby in New Zealand, and you’re likely to get wide-ranging reactions. Some people live and breathe the sport and go into mourning when our national team loses a match. Others just can’t understand our nation’s obsession with a game where grown men chase around an odd-shaped ball.
I bet you can guess which side I fall on. I make an excellent armchair coach and referee. Just ask my husband.

For those of you who are interested in rugby and the world cup check out the official RWC website http://www.rugbyworldcup.com/index.html or the All Black’s site http://www.allblacks.com

If you have an iPad or iTouch you can download the free RWC 2011 application to follow latest world cup news, videos and player news. There’s also a fan zone.

To finish my post, I thought I’d introduce you to the world of rugby through a video. The New Zealand All Blacks do a traditional Maori war dance called the haka at the start of each match. This clip shows parts of the haka plus actual game footage. There are two additional clips of the haka and some rugby facts at my website http://www.shelleymunro.com/for-readers/behind-the-scenes-rugbys-the-game/ 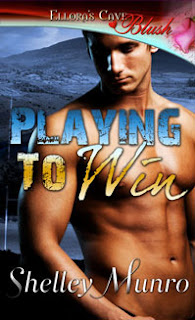 Professional rugby player Lane Gerrard is used to women throwing themselves at him, but a scurrilous tabloid article naming him as father of a child sends his temper soaring. The woman he confronts doesn't fit the blackmailer profile. Kate Alexander is attractive with an enchanting innocence, enticing. A total stranger. Her feistiness draws his unwilling admiration, but the child…he is the image of Lane.

Kate can't deny her son's similarity to the sexy man at her door but no way will she hand him over without a fight. Kate doesn't possess money but she can shower her son with love. With public speculation rife, Kate reluctantly works with Lane to discover the truth. They grow closer as distrust slowly turns to mutual fascination, but the tabloid articles bring out a stalker. Mild pranks escalate into danger, and suddenly Lane realizes Kate is a woman he could love. With Kate and her son, he could have a family. Now, with his heart on the line, this is one game he's playing to win.

Shelley Munro lives in New Zealand and writes hot and spicy romances for Carina Press, Ellora’s Cave and Samhain Publishing. She has written several romances featuring rugby. Playing to Win and Issy’s Infatuation are both m/f romances while Wanna Do Bad Things With You and Best Man are m/m romances. You can visit Shelley and learn more about her books at http://www.shelleymunro.com
Posted by Stephanie Burkhart at 6:00 AM