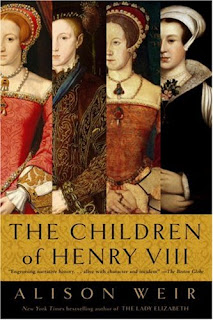 Alison Weir is a historical author that I really enjoy. She infuses her writing with little behind the scenes happenings that make history fun!
Enjoy.
*****
Book Review for “The Children of Henry VIII”
Written by: Alison Weir
Ballantine Books
ISBN: 978-0-345-40786-3
394 pages
$16.00
5 Stars

Weir weaves a haunting tale of lost innocence in demanding times as Henry VIII’s heirs to his legacy make their way through persecution, intrigue, and deception. Weir tells each heir’s story with honesty and compassion against the conflicting religious backdrop and fanaticism of their father’s making. Edward VI embraces the new Protestant religion, but because of his minority, has to deal with a regency council. His sister, Mary, daughter of Katherine of Aragon, believes Catholicism is the true religion. She’s just as passionate about her religion as Edward is of his. Then there’s Jane Grey and Elizabeth Tudor, heirs to a Protestant religion which could prove their downfalls. Weir examines each of their actions and gives the reader a fascinating look into this dark period of Tudor history.

When Henry VIII dies, his son, Edward, who is nine, ascends to the throne. A regency council and Lord Protector, his uncle, Thomas Seymour, rule for him until he’s of age to rule for himself. Edward is well educated, but cold and aloof in his personality. He embraces the new Protestant religion founded by his father, and institutes reforms that are well received by England’s citizens. His relationship with his thirty-year-old sister, Mary, is strained since she embraces Catholicism. Edward is fifteen when he begins to assert himself, but just when he’s primed to take over the reigns of kingship, he’s felled by what appears to be consumption. His Protector, now John Dudley, appears to have poisoned him, worsening his condition. Edward dies before the promise of his reign can be realized.

John Dudley, fearing Mary’s stanch Catholicism is bad for the country, makes Edward name Lady Jane Grey as his heir. She is the oldest daughter of Francis Brandon, who is in turn, the daughter of Mary Tudor, Henry VIII’s younger sister. In Henry’s will he named Mary Tudor and her heirs in line for the throne after his heirs.

Unfortunately, the tide of support is against Jane. Mary claims her right of queenship behind the will of the English people. A reluctant queen, Jane is sent to the tower. John Dudley is executed and Mary assumes the throne.

The affairs of the realm had been neglected since Edward’s death. Mary forms a council and looks for a husband, realizing she has a duty to produce an heir for England. She promises no major changes in worship, but brings back Catholicism to the court. Soon, Mary is wedded to Phillip of Spain. It is the first of many faux pas committed by her. Her subjects don’t approve of their Spanish bridegroom. Phillip stays long enough to believe she’s with child, and then leaves to attend to his other affairs. Mary reinstates the old hearsay laws from the 1400’s and begins burning Protestants at the stake. This earns her the nickname, “Bloody Mary.” Weir notes the nickname is ironic since Mary is quite agreeable in person.

Unfortunately for Mary, she proves not to be with child. After a long separation from Phillip, he returns, only to leave weeks afterwards. Mary believes she’s with child again, but she’s not. Her ill health takes a toll on her, and she dies in November 1558. Her sister, Elizabeth, ascends to the throne.

Elizabeth has had a troubled life up to this point. Well educated, she also receives life lessons that sharpens her intuition. After her father dies, she goes to live with Katherine Parr and her new husband, Thomas Seymour. Thomas’s advances toward Elizabeth are inappropriate and force Elizabeth to leave her step-mother’s care. Elizabeth is devastated by this. During Edward’s reign, Elizabeth is left alone, but when Mary comes to the throne, Elizabeth must celebrate mass to keep her head. Like a skilled manipulator, Elizabeth avoids intrigue that would harm her. After stints in the tower and house arrest under her sister’s rule, Elizabeth comes to the throne. She immediately stops burning Protestants at the stake.

Weir’s writing never lingers. The books moves at a fast pace as she reveals little tidbits into Henry’s heirs. History comes alive under her storytelling. The Tudor children were never so passionate, compelling, or alive as they are in Weir’s skilled hands.
Posted by Stephanie Burkhart at 10:02 PM