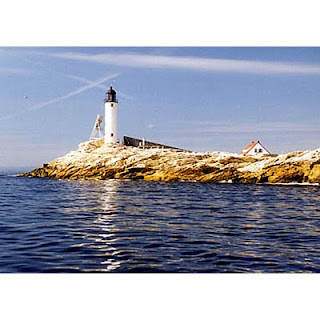 I know I'm late here, but I wanted to share my love of lighthouses with you.

For me, I've always been attracted to the sea. Growing up in Manchester, NH, I was only an hour west of the Atlantic Ocean. Going to Hampton Beach and playing in the surf are happy childhood memories for me. It wasn't unitl I was an adult though that I discovered lighthouses.

Lighthouses have a silent, romantic quality to me. They stand sturdy, lighting the way on the blacked nights and the roughest storms. They were a shing beacon of hope to travlers who passed by.

Lighthouses dot both our coasts and several of our lakes. I visited my 1st lighthouse in York, Maine when I was a young adult and was impressed by it's quiet strength and rich history.

Today, my husband and I have several lighthouses pictures and motifs in our home to remind us of our love for the sea.

Moving on to my old home...

While NH has the smallest coastline in the U.S. (only 9 miles) it has several lighthouses that embody the romance of the sea. White Island, one of the NH Isle of Shoals, was the first to have a lighthouse which was built in 1821. Originally, it flashed red, white, and blue, but the blue was stopped due to poor visibablity.

In 1838, Thomas Laighton become the lighthouse's innkeeper. His daughter, Celia Thaxter, gained widespread fame as a poet and author.

After a storm in 1839, the brig, Pocahontas, was wrecked on a sandbar inspiring Thaxtor's poem, "The Wreak of the Pocohontas."

In 1986, the lighthouse was automated. More recently, a restoration project was started on the lighthouse to preserve it's condition which was deterioting. The innkeeper's house was reroofed and painted. Rotting wood work was replaced. Bricks were also replaced. Now, in 2009, the lighthouse uses LED lights. It's come a long was from the first Fresnel lens to LED, but White Island Lighthouse still inspires as a rich gem on NH's Romantic seacoast.

Here's a poem in honor of the romance of the lighthouse, which I recently wrote:

The Romance of White Island Light

A humble fisherman came bold,
wanting a reprieve ffrom the cold.
She took him in from the sea's sight.

A fire blazed in a warm room.

Bright white beams pierced the dark night.
A summer's gale whipped up fright.
The bricks stood the time under the moon.

He had to leave by the light of dawn.
Sweet promises he gave to return.
She closed the door, heart beating tight.
Bright white beams pierced the dark night.
Posted by Stephanie Burkhart at 11:04 PM