I've never seen the Statue of Liberty up close. I'd love to, and I will one day, but right now my chances are slim.

Truth be told, I don't know if I need to see her up close. She's on coins, postcards, and stamps. She's been in several iconic movies. For me, the most chilling representation of what she stands for is in the "Planet of the Apes" – Lady Liberty half buried in sand is a poignant statement. Freedom and Liberty as we knew it has died an ugly death (in the movie.) Thank goodness, that is only a movie and the real Lady Liberty still stands tall and proud in New York Harbor.

What does the Statue of Liberty mean to me? It embodies the high ideals that the founding fathers strived for: freedom, liberty, the pursuit of happiness, equality, and justice. Some of these lofty ideals we still struggle with 244 years after the Declaration of Independence was signed. For me, I look to the Statue of Liberty and I believe that American spirit will never die.

Have a great 4th of July. May it be filled with fun, BBQ, and fireworks – and a toast to liberty.

Enjoy these fun facts about the statue:

--The Statue was a gift to the United States from the people of France.

--Lady Liberty was dedicated on 28 Oct 1886 by President Grover Cleveland.

--The US faced great economic challenges raising money to build the pedestal. (The French did the rest) Joseph Pulitzer spearheaded a fundraising drive. Soon, 102,000.00 dollars were raised from 120,000 donors. 80% of the total had been 1.00 or less. 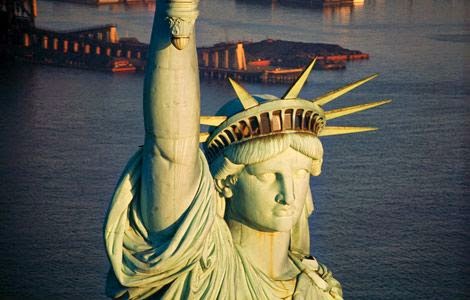 --Emma Lazarus initially declined to write a poem for the statue. When she observed the living conditions of refugees in New York from Eastern Europe, she expressed her empathy by writing "The Colossus." The poem's most iconic lines: "Give me your tired/your poor/your huddled masses/yearning to breathe free."

--No one in the US died during the construction.

--On 28 Oct 1886, New York had a parade. The stock exchange threw ticker tape from the windows. It was the 1st ticker tape parade.

Question: What does Lady Liberty mean to you? I'd love to hear your thoughts.

Me? I have to work at the call center for LAPD from 6 am to 2 pm. Then I'm off to BBQ at Castaic Lake with the boys and then Magic Mountain for the light show. How do you plan to spend your 4th?