Victorian Scoundrel 2012 Romance of the Year 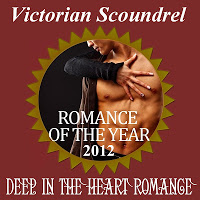 Victorian Scoundrel, Book 1 in "The Windsor Diaries," my steampunk romance was picked as the 2012 Romance of the Year at Deep in The Heart of Romance. I'm so excited to win and I want to thank everyone who voted for the book. I really appreciate it.

HERE'S A LOOK AT VICTORIAN SCOUNDREL:

BLURB: When Alice follows her cousin, Edmund, back through time, she has no idea the mischief she's in for!


REVIEWS: Reader's Favorites: 5 Stars, Molly E: She grips the reader instantly, and keeps them hooked until the last page... I highly recommend this with highest of 5 stars, and I can't wait until the second Windsor Diaries installment releases!

Overall, a fun and breezy read that really doesn’t take itself seriously. With sweet and funny characters, the tale was enjoyable and engaging. A fantastic edition to the steam-punk genre....bring on book two :) 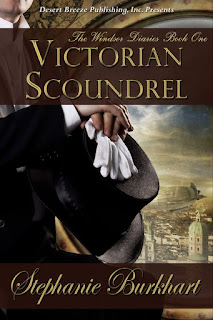 Posted by Stephanie Burkhart at 6:30 AM

Email ThisBlogThis!Share to TwitterShare to FacebookShare to Pinterest
Labels: Deep in the Heart of Romance, Romance of the Year, Steampunk romance, Victorian Scoundrel