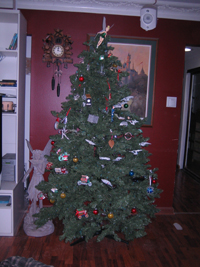 Holidays at the Nutt House
By Karen Michelle Nutt

A Glimpse of Christmas Past…

My eldest, Kendra was almost three when the Disney’s Little Mermaid premiered. She loved everything to do with Ariel. For Christmas, Santa brought her all the collector characters. (They were the hard plastic statues.) She was so excited and named off each of the characters as she pulled them out of her stocking. In a cute little voice that only a three year old could have, she said: This is Ariel. And this is Sebastian. Ooh and this is Flounder.” She pulled out King Triton next and we ask her who he was. “He’s…he’s…he’s my father.” We couldn’t help but chuckle. Not only did she love Ariel, she thought she was Ariel. lol

Now she’s twenty-five with a degree in massage therapy and working at a salon. She is also writing a novel. She joined in on NaNo this year. What is her story about? Yep, you guessed it: Mermaids.

Katrina is the middle child who loves the movies---anything from the classics to the blockbusters of today. She couldn’t get enough of Lord of the Rings and of course the dashing Legolas was her favorite. I’d find binders with his name scrawled all over it. She’d tack pictures from magazines of him on her walls. Then there was Twilight and she had to have a stocking with Edward Cullen. (She still has it, too.) lol Though her original stocking hangs from the fireplace now.

She’s currently is creating videos and also joined NaNo this year. Her love of fantasy and the paranormal has helped her to create a fascinating story surrounding the Irish werewolf legend.

Vincent is my baby. Though he’s eighteen now and built like a football player. As a child he was the reason safety latches and plug coves were invented. If this kid could put a new toy into the light socket, he would.

When he was too quiet, I knew he was up to no good. I’d ask him, “What are you doing?” and he would respond with, “Something.” And you could bet it was something I wasn’t going to like. One Christmas Santa brought a playhouse for Katrina and Vincent. It was a big plastic one that Santa assembled in the house. One day Vincent was in there by himself, but was awfully quiet. I had to investigate. I opened the window and peek in. “What are you doing?” I asked. He immediately hid something behind his back. “Hand it over,” I told him. And he slowly reveals the item. I almost fell over. It was a kitchen knife. This wasn’t just any knife. It was a large knife that might as well have been a sword. I’m freaking out, but managed to relieve him of the knife without panicking him. I asked him what he thought he was going to do with the knife. He said, “I wanted to cut open a package.”

We had a little talk why he should not use a knife. Locks were immediately placed on the kitchen drawers. I have to say, he was too short to even see into this drawer. He must have just felt around until his little hand clasped the handle.

Today, Vincent is attending the Arts Institute for video design where the only swords he handles are part of the game he’s created. He also works part time with an electrician—so his fascination with light sockets hasn’t quite worn off.

The weather is usually comfortable in Southern California and we can enjoy the outdoors. Sometime during the Holiday we like to visit the happiest place on earth: Disneyland! The decorations, the music and the smiling faces always puts everyone in the holiday mood for fun.

I hope you enjoyed a glimpse of the Nutt House during the holidays. Since it is a time for giving, I’d like to offer one person a chance to win a PDF copy of one of my books. Winner’s choice!

What do you have to do? I’d love to hear about one of your Christmas Shenanigans, cute story or what you like to do around the holidays. Please remember to leave your email so I may contact you if you should win.

Stephanie,
Thank you so much for having me on your lovely blog.
To Everyone: Merry Christmas!! Happy Holidays! And let’s hope the New Year brings us joy!!

About the Author: Whether your reading fancy is paranormal, historical or time travel, all her stories capture the rich array of emotions that accompany the most fabulous human phenomena—falling in love.
Visit the author at: http://www.kmnbooks.com
Stop by her blog for Monday interviews, chats and contests at:
http://kmnbooks.blogspot.com