Wednesday Scoop from the Publishing World 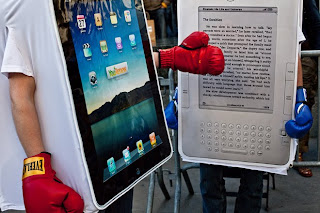 Isn't that a cute picture? A Kindle and a iPad making friends? *grin*

I just want to say thank you to everyone who supported me on my recent blog tours. In July, I went on a blog for my novel, 'Destination: Berlin,' then in August I went on a blog tour for "The Giving Meadow." I enjoyed the tours very much, but I am a bit pooped. *grin* so I'm going to take a break and try to get back to my own blog schedule. I hope to get out a little bit on some of my other blogs I'm affliated with and I'll post those dates on the side bar as they come up.

Wednesday's here is always scoop from the publishing world and I usually take a look at Publisher's Weekly since they have the most recent and update info. This is a link to them: http://www.publishersweekly.com

SONY UPDATES IT'S EREADERS:
The rumors earlier this month were spot on. Sony is indeed releasing a redesigned and upgraded suite of its three digital readers—the 5”screen Pocket Edition; 6” screen Touch Edition and 7”screen Daily Edition—offering full optical touch screen functionality, nonglare black & white e-ink display along with reduced size and weight. The new devices are not only stylish—they come in silver, black and pink aluminum skins—but also offer stepped up power, crisp page-turning and increased storage capacity. Only one model, the top of the line Daily Edition, offers 3G/wireless. The Pocket and Touch Editions will be available beginning today; the Daily Edition in November.


Daily Edition
Despite the frenzy to cut prices in the digital reader marketplace, Sony seems determined not to go down that road. The Pocket Edition, with USB cable file transfer, is $179; the Touch Edition, also with USB cable file transfer and expandable storage, is $229; and the Daily Edition will sell for $299. Despite lowering its prices earlier in the summer, Sony has effectively returned the devices to their former, higher price points. It will be interesting to see if these prices hold in a market full of devices selling for significantly less. By the holiday shopping season it’s likely that there will be full color backlit LCD reading devices selling for $99 and the price of the b&w Kobo Reader, formerly $150, has now been lowered to $99.

STEPH'S THOUGHTS: I like Sony's new look. The Daily Edition which is compatable to the Kindle 3G is $100.00 more than the Kindle. Only time will tell if not lowering the price will work. Interesting Note: Sony is one of the rare EBook readers you can find in stores. I've seen them in Toys R US, Best Buy, and other techie places.

RUMOR MILL: The Kindle is supposed to be going into a certain few stores soon, Target is one I believe but I don't know if they are in stores yet.

Personally speaking, the more ebook readers in brick and motar stores the better. It helps to get the work out.


JUNE EBOOK SALES UP 119%!!
Electronic books continue to show explosive growth in the Association of American Publishers Monthly Sales report. The AAP reports that June 2010 gross e-books sales were $29.9 million, an increase of 118.9% over the $13.7 million in sales reported for the same period in 2009. Gross e-book sales for the first six months of calendar year 2010 are $180 million, a 203.8% increase in sales over the $59.2 million sales reported for the same calendar year date in 2009.

STEPH's THOUGHTS: Ebooks are the wave of the future and continue to grow. These figures are encouraging!


BORDERS LAUNCHES A PAID LOYALITY PROGRAM:
Borders is unveiling a customer rewards program called Borders Rewards Plus through which customers, for a $20 annual fee, can get discounts on merchanside and free shipping on most online orders. The new program is in addition to a free members program. B&N charges customers a fee to belong to its members program.

To entice customers to participate in the new program, which will become available on September 1, Borders is offering Borders Rewards Plus members the opportunity to earn "Borders Bucks" more quickly through September 6. As Borders explained: typically, members earn $5 in Borders Bucks for every $150 they spend annually, but during this period, Borders will double the spend to bring the member closer to the $150 threshold faster."

In addition to receiving discounts and free shipping, Borders Loyalty Plus members will also receive 40% off the list price of hardcovers (while members of the free loyalty program receive 30%).

STEPH'S THOUGHTS: Borders has been struggling for years and I think a loyality program is good, but to pay $20? Are the incentives worth it? I think what will save Borders is for them to embrace Kobo and the sales offered through ebooks.


THE KINDLE 3
he Kindle 3 is the best e-reading device currently available; arguably, the iPad blows any single-purpose device out of the water, but that’s a topic for another article, and if you prefer and E-Ink screen to the iPad’s LCD, the Kindle 3 is far and away the best device you can get. It’s been thoughtfully redesigned with small but meaningful updates on the design and functionality of the Kindle 2, which, while they don’t amount to a big change in how the Kindle works or what it does, they do make the Kindle 3 easier and more fun to use.

The most noticeable improvement is the much sharper screen: it has a whiter tint than the screen on the Kindle 2, and the text is considerably crisper. It’s similar to the difference between the display on the iPhone 3Gs and the “Retina” display on the iPhone 4: even if you didn’t mind your old display, this new screen is so much better that it makes you think your old Kindle screen was comparatively grainy, so Amazon solved a problem you didn’t know you had.

Next, the Kindle 3 is a lot faster, than the Kindle 2. Page turns no longer have that little lag; they happen, if not almost instantly, in about the time it takes to turn an actual paper page. The new Kindle spends less time “thinking” in general, from opening and closing books, entering and moving around the Kindle store, to waking and sleeping. Again, the old Kindle wasn’t that slow, but this one is faster than any other e-reader out there.

Amazon also made a bunch of improvements to the body and physical mechanics of the device. First off, the Kindle is a good deal smaller--it’s somewhere between the length and width of a mass market and trade paperback, and about as thick as a pencil. It’s noticeably lighter, too. Best of all, the buttons are all much more satisfying to press. The page turn buttons--which are now smaller and mirrored on the left and right of the screen (no more big home button on the right side--it’s been moved down into the keyboard)--are nice and springy. You can actually blackberry-type on the keyboard, which is a huge improvement. Instead of the weird little joystick that’s on the Kindle 2, you’ve got an embedded directional control with a big “select” button in the middle which is perhaps a bit too sensitive. The new graphite body of the Kindle also has a satisfying, vaguely gripy back. The on/off slider is also now on the bottom of the device, which is confusing if you’re used to looking for it on the top, as on the Kindle 2.

The other cool thing Amazon’s come up with is a branded case with a built-in book light that slides out of the upper right corner. It’s powered by the Kindle’s rechargeable battery, so only turns on when the Kindle is in the case and switched on. The case costs a hefty $59, but it’s cool.

As far as the downsides, you are, of course, still locked into Amazon’s store, but that’s not going to change--Amazon, at its core, isn’t a hardware manufacturer, it’s a company that innovates retail. Neverminding it’s nice features, the Kindle is, finally, a portable gateway into Amazon’s store. The Kindle is also an E-Ink device, and all it does it display text; some users may be comforted by that limited functionality, others frustrated. Apple is likely to introduce a smaller iPad soon, which may push E-Ink, and dedicated readers, toward the background. We’ll see.

But this is the best E-Ink device you can get right now. The changes and updates, while very cool, might not, however, justify scrapping your Kindle 2 in exchange for a Kindle 3--they’re still pretty similar. Maybe wait for the Kindle 4, which is rumored to have a feature that will let you read books that, as of today, haven’t even been written.

STEPH'S THOUGHTS: My husband ordered the Kindle 3. Can't wait to see it as I LOVE my Kindle !

I welcome your thoughts, comments and opinions on the publishing world.
Smiles
Steph
Posted by Stephanie Burkhart at 9:38 AM