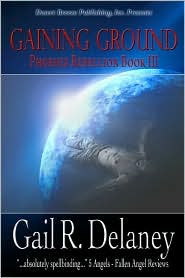 "Gaining Ground" is a pulse-pounding installment of The Phoenix Rebellion filled with excitement, heartbreak, and love. Set in the near future, 2053, the Areth are an alien race who have come to Earth to share their medical technology, but they soon reveal more sinister motives.

The novel opens with LT Jason (Jace) Quinn as a prisoner of the Areth. Phoenix field agent, Jackie Anderson, finds him and frees him. Jason is weak, dehydrated, and malnourished. He also has no memory of his recent life including his time with Phoenix, or his wife, Lilly.

Lilly is a doctor for the Phoenix base in Tennessee. Jace is taken there to recover. Lilly hopes her presence during his covalence will help jar his memory. After pushing herself too hard, she collapses in front of him. It brings a rush of memories forward in Jace and he finally remembers her. Unfortunately, the Areth prison has done its job and left his heart a cold shell of its former self. Can Lilly bring him to remember the passion of their marriage?

Beverly Surrimoto, the second in charge of the base, continues her passionate affair with Victor, the Areth traitor who now lives with Phoenix. The demon in Victor's mind makes him aware of a chilling secret that Victor withholds from Beverly. When the secret is revealed, can Beverly bring herself to forgive him?

Col. Nick Tanner finds the Eumanei home world. The Eumanei are a humanoid race who appear willing to help him, but Nick has second thoughts when he discovers that the Eumanei and the Areth are allies.

Before the end of the novel, new alliances are forged, some old alliances are shattered, and the Rebellion learns that moving forward to regain their world won't be easy.

"Gaining Ground" is smartly written, keeping the reader turning the page. Delaney hooks the reader from page one. The story flows well, and Delany weaves the threads of the plot together effortlessly. Delaney uses a good economy of words to paint her futuristic world without lingering.

Delaney has assembled an all-star cast which shines in this installment. Nick is a battle tested soldier whose determination to complete his task is a trait to be admired. His son, Michael, is a steadfast and loyal member of the Rebellion. Lilly's quiet strength and inner courage inspire Jace to find himself. Beverly's love helps Victor tame the monster within.

The love scenes in the novel are sensual and tasteful for romance readers. "Gaining Ground" has it all – love, betrayal, heartbreak, and hope.
Posted by Stephanie Burkhart at 5:08 PM